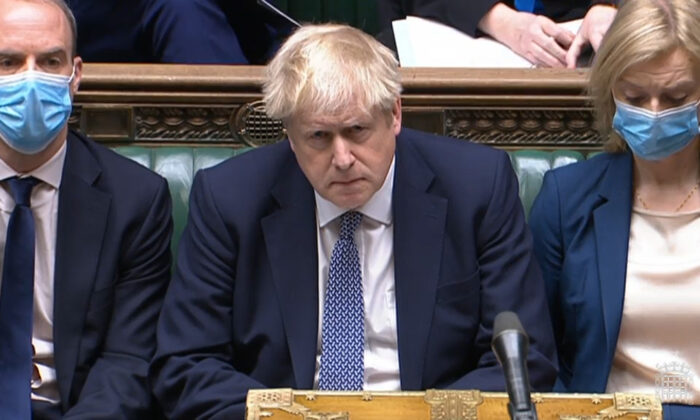 Downing Street has denied Prime Minister Boris Johnson was told in advance about a drinks party in the Number 10 garden in the midst of the first COVID-19 lockdown.

Johnson admitted on Jan. 12 that he attended a gathering in the garden for around 25 minutes on May 20, 2020, to “thank groups of staff.”

At the time, England was under strict CCP (Chinese Communist Party) virus restrictions banning groups from meeting socially outdoors. But Johnson insisted the event “could be said technically to fall within the guidance” as he “believed implicitly that this was a work event.”

Dominic Cummings, Johnson’s former right-hand man in Number 10, who has now become one of the prime minister’s strongest critics, accused his former boss of lying to Parliament, insisting that Johnson had been warned about the gathering beforehand.

In response to the new allegation, a Number 10 spokesman insisted, “It is untrue that the prime minister was warned about the event in advance.”

Deputy Prime Minister Dominic Raab also said it was “nonsense” to suggest that the prime minister lied. He told Times Radio: “He’s made it very clear to the House of Commons … that he thought it was a work event.”

In a blog post on Jan. 17, Cummings said that he raised concerns with Johnson after the prime minister’s principal private secretary Martin Reynolds sent out an email inviting more than 100 people to a “bring your own booze” event in the Downing Street garden.

Cummings said he told Johnson to get a grip on the “madhouse,” but the prime minister “waved it aside.”

Cummings said regarding that day alone, “never mind the string of other events,” the prime minister “lied to Parliament about parties” by insisting he had been assured no events had taken place that would have broken COVID-19 rules.

“Not only me but other eyewitnesses who discussed this at the time would swear under oath this is what happened,” he said.

The latest allegation from Cummings, who left Downing Street in November 2020, has increased the pressure on Johnson, who is facing public calls for him to resign from six backbench MPs in his own Conservative Party.

Angela Rayner, deputy leader of the main opposition Labour Party, renewed her call for Johnson to step down now.

“Instead of hiding behind internal inquiries or technicalities, we need the prime minister to tell the truth, pure and simple,” she said. “He must resign.”