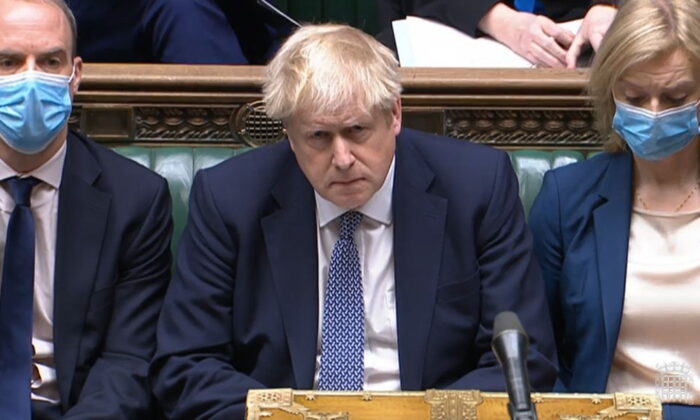 British Prime Minister Boris Johnson’s office has apologised to the Queen after it was reported that two lockdown-breaching parties were held on the eve of the Duke of Edinburgh’s funeral in April.

The Telegraph reported that advisers and civil servants gathered after work for two separate events on April 16, 2021, in violation of COVID-19 restrictions which banned indoor mixing.

The next day, the Queen attended the funeral of her husband, the Duke of Edinburgh, wearing a face mask and socially distanced from her family at Windsor Castle in line with COVID-19 rules.

A spokesman for Johnson said on Jan. 14 that Downing Street had said sorry to Buckingham Palace.

The spokesman said: “It is deeply regrettable that this took place at a time of national mourning and Number 10 has apologised to the Palace. You heard from the PM this week, he’s recognised Number 10 should be held to the highest standards and take responsibility for things we did not get right.”

The new revelation has exacerbated the political crisis fuelled by a series of alleged violations of lockdown rules in Downing Street during the CCP (Chinese Communist Party) virus pandemic.

Johnson was already facing calls for him to resign from senior Conservative politicians after he admitted attending a social gathering in the Downing Street garden during England’s first COVID-19 lockdown.

“This shows just how seriously Boris Johnson has degraded the office of Prime Minister,” he said. “The Conservatives have let Britain down. An apology isn’t the only thing the prime minister should be offering the palace today. Boris Johnson should do the decent thing and resign.”

Liberal Democrat leader Sir Ed Davey said: “Now is the time for Boris Johnson to finally do the right thing and admit he’s no longer fit to lead the country. We can’t afford to have a prime minister who has lost all credibility and moral authority in the middle of a pandemic.”

But Cabinet members have continued to show support for the prime minister.

Foreign Secretary Liz Truss said she was “very, very concerned” to hear the fresh allegations and said she understands “people across the country are angry about what has happened.”

The prime minister “has apologised” and the people “need to move on,” she said. “I 100 percent support him to continue getting on with the job.”