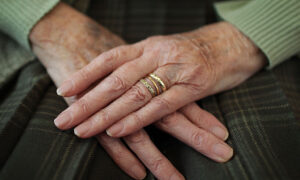 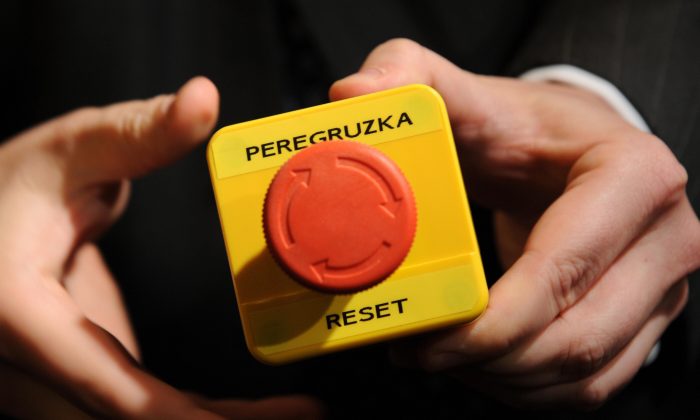 An assistant shows the block with a red button marked "reset" in English and "overload" in Russian that U.S. Secretary of State Hillary Clinton handed to Russian Foreign Minister Sergei Lavrov during a meeting in Geneva on March 6, 2009. (Fabrice Coffrini/AFP/Getty Images)
Opinion

Downing of Plane in Ukraine Highlights US, European Weakness

The downing of Malaysia Airlines Flight 17 casts new light on just how inept and decadent the United States and Europe have become.

Faced with Russia’s annexation of the Crimea and attempts to repeat that in eastern Ukraine, the U.S. and Western Europe and have mustered only strong words and token sanctions on top Russian officials and several companies. That’s hardly enough to deter Russian President Vladimir Putin’s ambitions to make Russia the dominant power in Eurasia.

Now, public outrage at the downing of the Malaysian airliner will force Western governments to offer Russia restraint from imposing truly effective sanctions on its subversive activities in the Ukraine in exchange for an international investigation. That likely will yield little more than already inferred.

Russia supplied the missiles and is culpable for enabling separatists who shot down the plane.

Not much else will happen. Six months from now Russian agents will still be operating in the Ukraine and planning similar uprisings in other former Soviet states.

The U.S. lacks sufficient military assets in Europe to deter Russian aggression, and Europe’s most powerful state, Germany, lacks the will to stand up to Russia.

President Obama has been too successful at paying for entitlements by cutting the defense budget, and German businesses are profiting too much from commerce with Russia.

Obama naively misjudged Putin. There is no reset button for relations with a regime led by a criminal. Putin has plundered businesses, crushed dissent and killed journalists. To believe he can be persuaded through diplomacy or by imposing minor economic costs is a fool’s journey.

Putin knows if he unwinds his plans slowly and occasionally appears to engage in meaningful discussions and cooperation, he can dupe Obama and Germany’s Angela Merkel and co-opt their political constituencies. The latter have already rationalized Russia’s annexation of the Crimea and will do the same if Putin slices off more of the Ukraine.

The U.S. and European economies have grown so slowly in recent decades that their governments cannot afford both the military needed to deter Russian aggression and a welfare state.

Voters have been so lulled into complacency with high-minded talk about international law and diplomacy that they believe they can turn their eyes away from Russian state terrorism without peril to their own security, much in the manner of Munich and Neville Chamberlain.

Rearming could not be accomplished simply by taxing the wealthy and big corporations as liberals in America and Social Democrats in Europe would demand. Entrepreneurs and multinationals would find ways to locate even more investment and taxable assets in fast-growing Asia.

Rather, ordinary Europeans and Americans must be willing to pay higher taxes or accept fewer social benefits to secure Europe from Russian aggression. That’s the rub.

Voters in Western nations simply won’t accept that they cannot have effective foreign policies and be secure without strong, growing economies to pay for the military to deter aggression and to persuade the developing world to their democratic way of thinking.

Eventually, the West will be eclipsed, isolated and unable to defend itself and its liberties. Most Americans and Europeans, for now, are reasonably prosperous and believe they can accept slower growth as the price for maintaining massive welfare states, whose taxes and benefits discourage investment and hard work.

What they are unwilling to recognize is that their welfare states and consequent slow growth will ultimately undermine their security and survival.