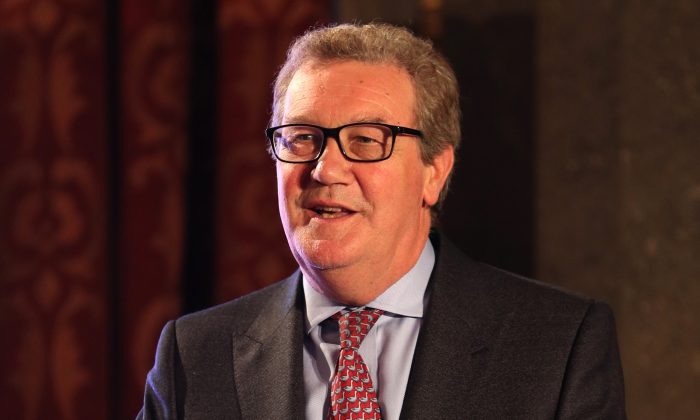 Former Australian ambassador to the UK Alexander Downer has denied that the purpose of his 2016 meeting with George Papadopoulos, then-adviser to the presidential campaign of Donald Trump, was to entice the aide to talk about Russian meddling in the 2016 U.S. presidential election.

“I didn’t go to the meeting thinking he was going to even mention Russia in that context like the election campaign,” Downer told Sky News Australia in recent interview. “I had no idea what he would say.”

Papadopoulos has alleged that the Downer meeting was a set-up.

“The notion that Downer randomly reached out to me just to have a gin and tonic is laughable,” Papadopoulos said in a Sept. 10, 2018, tweet. “Some organization or entity sent him to meet me.”

In his book, “Deep State Target: How I Got Caught in the Crosshairs of the Plot to Bring Down President Trump,” Papadopoulos argues that Trump’s opponents tied to the U.S., Australian, and UK intelligence community orchestrated for Papadopoulos to receive a rumor of Kremlin’s having “dirt” on then-candidate Hillary Clinton, and then dispatched operatives, including Downer, to extract the rumor from him and use it as evidence of supposed conspiracy between Trump and Russia.

Downer denied that the FBI or any intelligence service asked him to meet with Papadopoulos.

“Somebody who is a former foreign minister and Australian high commissioner, or ambassador, in London is hardly going to be somebody who’s used by intelligence services to collect information,” Downer said, with a chuckle. “That would never happen. That simply isn’t how those kind of operations work.”

Downer’s assertion seems to gloss over the known hand-in-glove relationship between diplomacy and intelligence. A secret cable sent out by Clinton’s State Department in 2009, for instance, tasked diplomats to collect a plethora of information from their interactions with United Nations officials. The cable, published in 2010 by Wikileaks, indicates that intelligence collection by the diplomatic corps was already common practice at the time and, if anything, expanding.

Downer, later in the interview, even called himself “somebody who is part of the Five Eyes intelligence community.” Five Eyes is the agreement on sharing signals intelligence between the United States, the UK, Canada, Australia, and New Zealand. The alliance has been criticized for opening a way for the countries’ foreign intelligence agencies to spy on their own citizens by outsourcing the task to each other and then sharing the results.

Downer also is connected to the intelligence community through the private sector.

Between 2008 and 2014, he sat on the advisory board of London-based Hakluyt, a security firm founded and staffed by former UK intelligence officials.

While Downer had to leave the firm before joining the Australian diplomatic corps, he continued to attend the firm’s functions, including client conferences, News Corp Australia Network reported in January 2016.

The Downer-Papadopoulos meeting is allegedly the crucial moment that prompted the FBI to begin a counterintelligence investigation of people in the Trump campaign, which only ended in March. As concluded by special counsel Robert Mueller, who took over the probe in 2017, investigators didn’t establish that any collusion between Trump and Russia occurred.

Papadopoulos “opened up” to Downer in May 2016 “during a night of heavy drinking” at Kensington Wine Rooms in London, The New York Times reported in December 2017, based on information leaked by “four current and former American and foreign officials.”

In his final report, Mueller said that “on May 6, 2016, Papadopoulos “suggested to a representative of a foreign government that the Trump Campaign had received indications from the Russian government that it could assist the Campaign through the anonymous release of information that would be damaging to candidate Clinton.”

The foreign government, presumably Australia, “conveyed this information to the U.S. government on July 26, 2016,” the report stated, four days after Wikileaks started to release emails allegedly hacked by Russians from the server of the Democratic National Committee (DNC).

Alarmed by Papadopoulos’ supposed foreknowledge of the Wikileaks release, the FBI launched the probe.

But there are a number of problems with this portrayal of the events.

First, Downer described the meeting to the media multiple times and never mentioned any “indications” of Russians offering assistance to Trump.

He said that “there was no suggestion that there was collusion” between Trump or his campaign with Kremlin, neither in what Papadopoulos said, nor in what he reported to Canberra. “All we did was report what Papadopoulos said and that was that he thought the Russians may release information—might release information—that could be damaging to Hillary Clinton’s campaign at some stage before the election.”

Papadopoulos said he doesn’t remember ever saying that to Downer. He was sentenced to two weeks in prison for lying to the FBI, but this was not one of the lies the bureau held against him. Media blamed his lack of recollection on excessive drinking that night, but both Papadopoulos and Downer denied getting drunk.

“It was only for an hour, and it was at six o’clock in the evening, so it was certainly not as the New York Times claimed, an alcohol-fueled evening,” Downer said, confirming the two of them and Downer’s counselor, Erika Thompson, had a gin and tonic.

Another issue is that both the Australian government and Papadopoulos said the meeting took place on May 10, not May 6. He has said this on many occasions long before the Mueller report came out, and told The Epoch Times via Twitter that his lawyers will look up the relevant records.

And here is the Australian govt confirming the Downer meeting took place on May 10. pic.twitter.com/f7sxdXi6QQ

The difference is important because, on May 9, former Judge Andrew Napolitano aired a rumor on Fox News that “there’s a debate going on in the Kremlin … about whether they should release the 20,000 of Mrs. Clinton’s emails that they have hacked into.”

For all Downer knew, Papadopoulos could have just mentioned what he heard on the news.

Papadopoulos said Thompson reached out to him on May 6 to arrange the Downer meeting, but he denied mentioning to her anything about information “damaging” to Clinton and there hasn’t been any public information suggesting otherwise. Moreover, he said he didn’t meet Thompson that day. The meeting was arranged through messages, he said. Thompson would, therefore, have had a record of the communication. The Mueller report doesn’t refer to any such record.

In fact, the rumor about Russians hacking Clinton has been online at least since May 6, 2016, when it was posted on the blog WhatDoesItMean.com, which is not considered a reliable source of original reporting. The article was already up around 1:30 p.m. London time so, theoretically, Papadopoulos could have stumbled upon it before meeting Downer even if the meeting took place on May 6.

Yet, Papadopoulos actually had heard the rumor from a different source and there lies another problem.

In early March 2016, right after landing his job with the Trump campaign, Papadopoulos was urged by his employer at the time, the London Centre of International Law Practice (LCILP), to attend a conference at the Link Campus University in Rome. There, on March 14, he met Maltese academic Joseph Mifsud, whose job was to attract foreign students for the university and who was also listed on the LCILP website as a board adviser.

Mifsud invited Papadopoulos to London under the pretext that he could help him arrange an official meeting between Trump and Russian President Vladimir Putin. Papadopoulos thought such a meeting would be a boon to Trump’s campaign promise to improve relations with Russia.

But it was a sham. Mifsud had mingled with Russian academia as part of his job and had some government contacts in the country, but he was apparently in no position to broker a Putin audience. The girl he introduced to Papadopoulos as a relative of Putin was actually just a student at the Link Campus who, prior to that, worked for a liquor wholesaler in St. Petersburg, according to Russian journalist Alexander Kalinin, who researched her background.

During their second meeting in London on April 26, 2016, Mifsud, who had just returned from a trip to Russia, said to Papadopoulos, “I have information that the Russians have thousands of Clinton emails,” Papadopoulos later told CNN.

Yet Mifsud told the FBI that was a misunderstanding.

The Mueller report states that when the FBI questioned Mifsud on Feb. 10, 2017, he “denied that he had advance knowledge that Russia was in possession of emails damaging to candidate Clinton, stating that he and Papadopoulos had discussed cybersecurity and hacking as a larger issue and that Papadopoulos must have misunderstood their conversation.”

The report portrays Mifsud as a Russian cut-out, but ignores his extensive ties to high-level Western politicians and government officials, including many tied to national security and intelligence.

Rep. Devin Nunes (R-Calif.) questioned this apparent omission in a May 3 letter to the heads of the FBI, CIA, NSA, and the State Department.

“If Mifsud has extensive, suspicious contacts among Russian officials as portrayed in the Special Counsel’s report, then an incredibly wide range of Western institutions and individuals may have been compromised by him, including our own State Department,” Nunes said.

The Mueller report says that Mifsud “falsely stated” that he hadn’t seen Papadopoulos since March 24, 2016.

Yet there’s no sign the FBI tried to reinterview Mifsud or charge him with lying. The report says that the agents couldn’t question Mifsud effectively because Papadopoulos lied to them.

Papadopoulos indeed lied about his contacts with Mifsud in a January 2017 FBI interview. But after he was arrested on July 27, 2017, he has extensively cooperated with the Mueller probe.

Mifsud was, at the time, still publicly approachable. The Italian newspaper La Repubblica managed to interview him as late as October 2017, when he attended a conference on cyber threat intelligence held at the Link Campus.

After that, he disappeared from the public eye, but was still living in Rome until May 2018 in an apartment apparently provided by Link Campus, according to an April 18 report by Italian list Il Foglio.

It’s not clear where he’s been since.