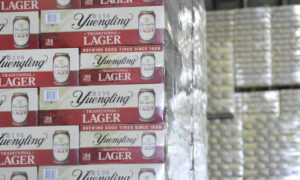 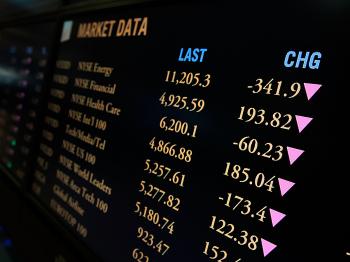 A screen displays the market stock on the floor of the New York Stock Exchange near the end of the trading day May 4, 2010. (Chris Hondros/Getty Images)
Business

By Antonio Perez
Print
NEW YORK—The Dow Jones Industrial Average tumbled on Tuesday amid fears that the fiscal crisis may soon spread to other European Union nations. The euro currency slid to a 13-month low against the dollar following market speculation against the Spanish and Portuguese economies.

In Europe, markets erased 2010 gains as the Stoxx Europe 600 Index dropped nearly 3 percent, ending down 0.3 percent year-to-date. In London, the FTSE 100 Index declined 2.6 percent, as did the DAX Index in Frankfurt, which also dropped 2.6 percent. Meanwhile, the euro currency slipped to $1.31, the lowest rate in 13 months.

Better-than-expected first-quarter earnings from U.S. corporations failed to stem a broad market selloff as investors are worried that European nations will soon buckle under the debt taken on to bail out their economies during the global financial crisis.

“Spain and Portugal are both endangered species,” Stanley Nabi, vice chairman of Silvercrest Asset Management, said in an interview with Bloomberg. “The attention could shift to one of those countries.”

“In the U.S., it’s no longer news that earnings are better than expected. The stock market has had a great run,” he continued. “I’ve got a feeling that May is going to be a month of consolidation or even of backing down a little bit.”