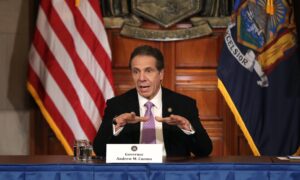 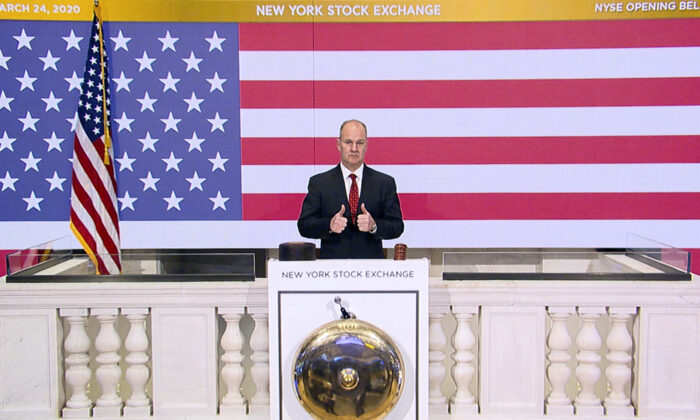 The Dow Jones Industrial Average jumped 2,112 points, a single-day record, amid Congressional negotiations on the passage of a major stimulus package to help the U.S. economy deal with the CCP virus pandemic.

The Dow gained nearly 11.4 percent, the most since 1933. The S&P 500 also increased by approximately 9.4 percent, which is an increase from Monday’s drop of about 3 percent for both the Dow Jones and the S&P.

Over the past several weeks, the stock market has plummeted on a near-daily basis, entering sub-20,000 territory for the first time in years. Since it peaked in February, the Dow Jones has lost more than 30 percent of its value.

The spread of the virus has already triggered harsh economic consequences as nonessential businesses are forced to shutter, people lose their jobs, and others are forced to work at home. Travel-related businesses such as airlines, hotels, cruise ships, and other forms of transportation have largely closed down.

On Sunday and Monday, the Senate failed twice in overcoming procedural hurdles on a sweeping stimulus package worth in excess of $1 trillion dollars, but Congressional leaders said on Monday and Tuesday that it’s getting close to passing.

President Donald Trump also signaled that he wants to lift lockdown measures as soon as possible.

“I’d love to have the country opened up and raring to go by Easter,” which is April 12, Trump said in a town hall hosted by Fox News on Tuesday.

“Our people want to return to work. They will practice Social Distancing and all else, and Seniors will be watched over protectively [and] lovingly,” Trump wrote on social media. “We can do two things together. THE CURE CANNOT BE WORSE (by far) THAN THE PROBLEM! Congress MUST ACT NOW. We will come back strong.”

The Republican proposal would send up to $1,200 to most taxpayers and more to individuals who have children.

“We are very close,” Senate Majority Leader Mitch McConnell (R-Ky.) said Tuesday on the Senate floor about passing the stimulus bill. “We’re on the 5-yard line,” he said, making a football analogy. “Today we can make all of the Washington drama fade away. If we act today, what Americans will remember and what history will record is that the Senate did the right thing,” McConnell remarked.

“Last night I thought we were on the 5-yard line. Right now, we’re on the 2,” Senate Minority Leader Chuck Schumer (D-N.Y.) said on the Senate floor.

And House Speaker Nancy Pelosi (D-Calif.), who offered stimulus package on Monday, said she is hopeful that the two chambers could agree on the measure.

“I think there is real optimism that we could get something done in the next few hours,” Pelosi told CNBC on Tuesday.