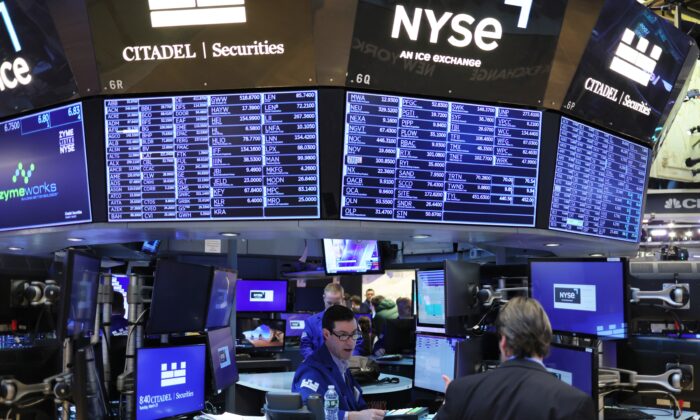 The Dow Jones Industrial Average tumbled 1,164 points as of midday Wednesday amid fears of inflation and a looming recession.

Target’s shares dropped after it revealed that inflation-caused higher costs will hurt the retailer’s profitability for the rest of the year. A day before that, Walmart issued a similar profit report that it also blamed on inflation.

In particular, Target saw its biggest percentage decline in shares Wednesday since its stocks plummeted nearly 33 percent on Oct. 19, 1987, also known as the “Black Monday” crash.

Tech companies such as Microsoft, Alphabet Inc., Meta Platforms, Apple Inc., and Tesla dropped between 3 percent and 6 percent after they led a rebound in the previous trading session.

Rising inflation, the conflict in Ukraine, prolonged supply chain snarls, pandemic-related lockdowns carried out by the Chinese Communist Party due to the pursuit of its “zero COVID” policy, and prospects of aggressive policy tightening by central banks have weighed on the markets recently, stoking concerns about a global economic slowdown.

The S&P 500 is down 16.8 percent so far in 2022 and the Nasdaq has fallen more than 26 percent, hit by growth stocks. Valuations for stocks as measured by the forward price-to-earnings ratio have come down sharply in recent weeks and that has increased the appeal of shares for some investors.

The United Nations this week said it is revising its forecast for global economic growth from 4 percent to 3.1 percent, saying that it will impact the world’s largest economies like the United States, European Union, and China.

Meanwhile, investors and even some CEOs have expressed concern that the Federal Reserve could trigger a recession if it raises interest rates too high or too quickly to curb inflation, which is running at a 40-year high.

“It’s going to be hard to avoid some kind of recession,” Wells Fargo CEO Charles Scharf said during a Wall Street Journal event Tuesday, although he stressed that he believes the recession will be mild and short-lived. “The fact that everyone is so strong going into this should hopefully provide a cushion such that whatever recession there is, if there is one, is short and not all that deep,” he explained.

But Fed Chairman Jerome Powell said in recent interviews that the central bank is going to raise rates as high as necessary to offset the rise in prices. Figures released in April 2022 show that annual inflation has increased by 8.3 percent.

Speaking to Marketplace, Powell said the inflationary pressures have been triggered by supply chain issues, not demand.

“It will be challenging, it won’t be easy. No one here thinks that it will be easy. Nonetheless, we think there are pathways … for us to get there,” Powell last week. “Whether we can execute a soft landing or not, it may actually depend on factors that we don’t control,” he added.