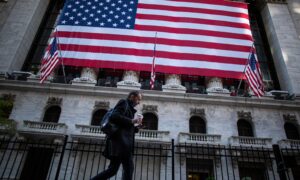 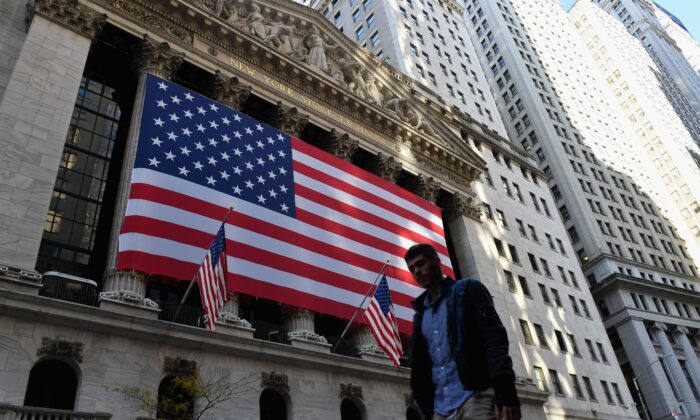 U.S. stocks surged on Nov. 16 as news of vaccine breakthroughs continue to fuel the market rally.

The Dow Jones Industrial Average rose more than 470 points, closing at a record high of 29,950, after biotech firm Moderna Inc. announced that its coronavirus vaccine candidate was 94.5 percent effective in a preliminary look at study results.

Since the start of this month, the Dow has risen more than 10 percent and is edging toward the 30,000 mark, a key milestone for the index.

Moderna’s Phase 3 study enrolled more than 30,000 participants in the United States, the company said in a statement. The Massachusetts-based firm, which plans to apply for an emergency use authorization (EUA) for the vaccine with the U.S. Food and Drug Administration, could receive the authorization in December, “if all goes according to plan,” CEO Stéphane Bancel has said.

Moderna expects to have nearly 20 million doses of vaccine ready for shipment in the United States by the end of the year. The biotech company’s stock jumped more than 9 percent following the announcement.

“Stock market getting very close to 30,000 on new vaccine news. 95% effective!” he wrote on Twitter.

Moderna is the second U.S. company to hit a key milestone in vaccine testing. Pharmaceutical giant Pfizer announced on Nov. 9 that its vaccine candidate, which it jointly developed with German company BioNTech, was 90 percent effective at preventing COVID-19.

Pfizer plans to request an emergency use authorization this month, with a potential distribution of the vaccine to begin by the end of the year.

“Based on current projections we expect to produce globally up to 50 million vaccine doses in 2020 and up to 1.3 billion doses in 2021,” Pfizer stated in a press release last week.

Besides upbeat news on the vaccine, merger announcements in the banking and retail industries also lifted U.S. stocks.

Better-than-expected trial results from Pfizer’s vaccine last week boosted equity returns in sectors that have been struggling since March. Laggard sectors including energy (up 16.5 percent), financials (up 8.3 percent), and industrials (up 5.3 percent) were the best performers last week. Some large airline and hotel stocks as well as a few large cruise line companies also rallied on vaccine news.

“However, many of these industries remain in a significant hole since the virus emerged,” Northern Trust Asset Management stated in a note to clients.

“While they would benefit from an eventual return to more normal pre-virus activities, social distancing measures are likely to remain in place until at least mid-2021 and a successful vaccine will take time to distribute.”

“The economy entered the fourth quarter with good momentum in the macro data, both in the labor market and in the GDP data. We also got some very encouraging news on the vaccine recently. On the other side, though, of course, infection rates in the U.S. are definitely increasing at a very high rate,” he said on Nov. 16 at a virtual panel hosted by Brookings Institution.

He warned that the next several months could be challenging for the economy due to cold weather. However, the central bank would use all available tools to support the economy, he said.