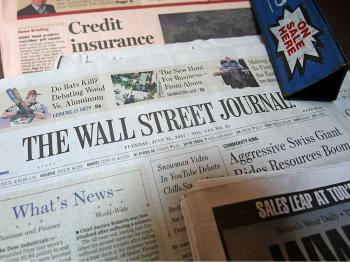 News Corp., controlled by Australian Chairman Rupert Murdoch, made a very public bid last year to purchase Dow Jones from the Bancroft family. The deal cost Murdoch $5.6 billion, and half of that amount is now gone as the economic recession and declining newspaper advertising takes its toll on the media giant.

On top of the Dow Jones revaluation, the company also wrote down $4.6 billion related to Federal Communication Commission licenses for its television stations.

News Corp. has saved about $100 million in combining the operations of both companies and plans to save an additional $40 million this year, the company said.

According to internal Dow Jones memos obtained by Reuters, the Wall Street Journal has already eliminated 25 positions, and would freeze salaries for the remaining employees.

A recent Financial Times report suggests that ailing DVD sales are another cause of revenue declines at media majors. Analysts attribute the declines to the rise in popularity of video on demand services and mail-order video rentals such as the service offered by Netflix. The recession has also hit revenues generated from Blu-Ray discs, the high-margin and high-resolution successor to DVD disks.

“While it's impossible to be completely prepared for a downturn of this magnitude, we began priming ourselves for a weakening economy earlier last year,” News Corp. Chairman Rupert Murdoch said last week in a conference call with analysts. Murdoch called the current recession “the worst global economics crisis” since the company’s establishment 50 years ago.

Media companies overall reported weak forecasts for 2009, and many are acting quickly to trim costs.

“As we look ahead, the ad environment remains challenged,” John Martin, Chief Financial Officer at Time Warner, said during a conference call with analysts last week. “In the first quarter, print advertising is pacing slightly worse than the 22 percent decline we saw in the fourth quarter”

Time Warner said it expects fiscal 2009 adjusted income per share to be in line with last year's adjusted earnings per share of $0.66. In addition, Time Warner announced that it would cut 1,250 jobs, or 3 percent of its total workforce.