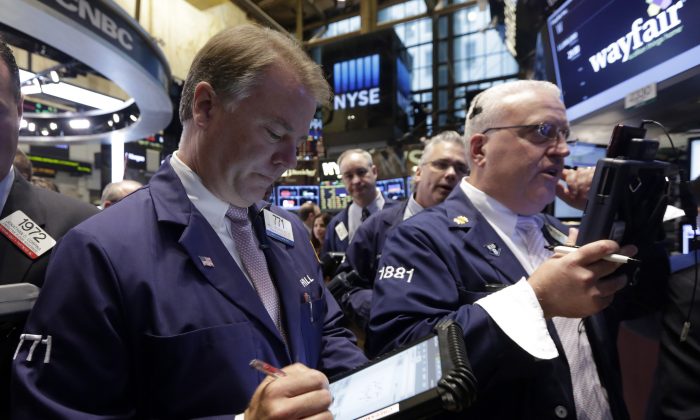 Traders F. Hill Creekmore and Thomas Ferrigno (R) work on the floor of the New York Stock Exchange, Thursday, Oct. 2, 2014. US stocks were solidly lower in early trading Thursday, Oct. 9, 2014, pruning back some of the gains from a massive rally the day before. Gap shares plunged after the company announced its CEO was retiring. (AP Photo/Richard Drew)
Business

NEW YORK—Turbulence returned to Wall Street for a third day Thursday, with the Dow Jones industrial average plunging more than 250 points in late afternoon trading. Energy stocks fell sharply as the price of oil dropped again, and Gap’s stock plunged after the company announced its CEO was retiring.

DRAINED OF ENERGY: A large part of Thursday’s selling was happening in energy stocks, particularly oil and coal companies, as the price of oil continued a multi-week decline. The energy sector of the S&P 500 fell nearly 4 percent, far more than the rest of the market. Exxon Mobil and Chevron, the nation’s two largest oil and gas companies, each fell roughly 3 percent.

Coal stocks were also taking a beating after Morgan Stanley analysts downgraded the entire sector. Peabody Energy, Arch Coal and Walter Energy were all down 8 percent or more.

OIL TRADING: The price of oil is plunging as concerns mount about slowing global economic growth while global oil production remains high. Benchmark U.S. crude fell $1.54 to $85.77 a barrel on the New York Mercantile Exchange, a third straight decline of more than 1.5 percent. Oil is now 20 percent below its 2014 peak of $107.26 a barrel, reached in late June. Brent crude, an international benchmark used to price oil used by many U.S. refineries, fell $1.33 to $90.05 a barrel in London, at one point slipping below $90 for the first time since June 2012.

NAUSEA: Triple-digit swings in the U.S. stock market have become common in recent days. Just this week, the Dow jumped 274 points Wednesday, which reversed a 272-point decline on Tuesday. The VIX, a measure of volatility that is sometimes called Wall Street’s “fear index,” jumped 25 percent to its highest level since February.

Market watchers have been warning that the market was due for some more volatility after months of relative calm.

“There’s a lot of cash on the side which wants to come back (into the market), but when you have big swings on alternative days like we are, folks are just not trusting the market,” said Sal Arnuk, a partner at Themis Trading, in an e-mail.

MEMORIES OF 2011: This week’s violent moves carried echoes of the summer of 2011, traders said, the last time the U.S. stock market went into what’s known as a “correction,” which is when stocks fall 10 percent or more from a recent peak. The Dow is now down roughly 3.5 percent from its Sept. 19 record high.

The Dow had four-straight days of 200-plus swings in August 2011 after the credit agency Standard & Poor’s downgraded the United States’ AAA credit rating.

EARNINGS: Traders also say the volatility may slow down once corporate earnings season gets fully underway. Aluminum company Alcoa reported its results Wednesday, which beat expectations, but the bulk of S&P 500 companies will not report for another week or so.

“Everyone seems to be waiting for earnings season at this point,” said Neil Massa, senior equity trader at John Hancock Asset Management.

GLOBAL GROWTH: Investors are also dealing with more disappointing economic news out of Europe. Germany’s exports sank 5.8 percent in August; the biggest monthly drop in five years. The figure raises concerns that Europe’s largest economy may fall into recession. The IMF cut its outlook for this year and next for the global economy, citing weakness in Japan, Latin America and particularly Europe.

CLEARANCE: Gap dropped $5.11, or 12 percent, to $36.77. The clothing chain’s CEO Glenn Murphy announced he would step down in February. The news came as a surprise to investors, since Murphy is only 52 and was expected to continue in his role for several more years. Murphy was credited for helping Gap navigate through the Great Recession and restoring the company’s appeal to younger customers.

ANOTHER CEO EXIT: Advanced Micro Devices, better known as AMD, fell 33 cents, or 10 percent, to $2.95. The chipmaker also announced a change in leadership, saying CEO and president Rory Read was stepping down. AMD has long struggled to keep its market share of the PC chip marketagainst its main competitor Intel.

CURRENCIES AND BONDS: The dollar declined to 107.84 yen and the euro fell to $1.2687. U.S. government bond prices were little changed. The yield on the 10-year Treasury note held at 2.32 percent.

OTHER ENERGY TRADING: Plunging oil prices are a boon for U.S. consumers in the form of lower gasoline prices. Wholesale gasoline futures fell 4.35 cents to $2.275 a gallon. The average price at the pump across the U.S. is $3.25, down 18 cents from a month ago. In other trading ofenergy futures on the New York Mercantile Exchange, heating oil fell 3.9 cents to $2.537 a gallon and natural gas slipped 1 cent to $3.845 per 1,000 cubic feet.