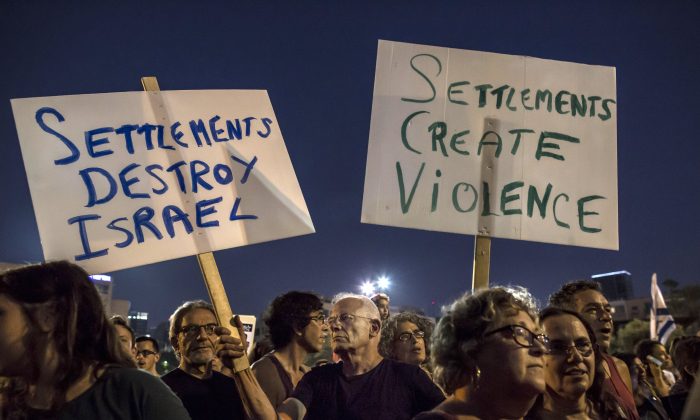 Israeli peace activists call for an end to violence, in Tel Aviv, Israel, on Aug. 1, 2015. Organizations critical of Israeli policy toward Palestinians say they are facing a crackdown by the government and hardline organizations amid a wave of renewed bloodshed in the Holy Land. (AP Photo/Tsafrir Abayov)
Middle East

JERUSALEM—With Israel mired in a wave of near-daily Palestinian attacks, hard-line Israeli politicians and activists are stepping up the pressure on dovish groups that are critical of government policies—drawing accusations of a nationalist witch hunt that risks turning violent.

In recent weeks, lawmakers have circulated bills to curtail the activities of non-government organizations, while a rival hard-line activist group has launched an even fiercer campaign that accuses opponents of being spies and foreign agents. Even the country’s president, a member of the ruling Likud party, has come under fire, with nationalists accusing him of coddling hostile groups.

The climate is testing Israel’s democratic ideals at a time when the country is feeling pressured at home by public anger over the continuing violence and abroad by growing international criticism of its policies toward the Palestinians. This sense of frustration and isolation is fueling what some say is a siege mentality that perceives opposition activists as the enemy.

“They are using the fear of the street to manipulate more and more hateful politics … against everyone who has the courage to stand up and say we are going in the wrong direction,” said Ishai Menuchin, director of the Public Committee Against Torture in Israel, a group that has called for investigating possible war crimes by the Israeli military.

Menuchin is one of four human-rights activists singled out in a video and newspaper ad published this week by the hawkish non-governmental group Im Tirtzu, which accuses the activists of being foreign agents and undermining the country because their groups receive foreign funding.

“While we are fighting terrorism, they are fighting us,” a voice intones in the video on Facebook and YouTube, as photos of the activists are shown. Viewers are then urged to support legislation banning their groups. Menuchin said he filed an incitement complaint with police but the video has not been taken down.

Three months of violence has helped fuel such sentiments. Hawkish Israelis accuse their dovish opponents of posing a threat by siding with the Palestinians, inviting what they see as deep-rooted and unwarranted hatred for the country.

Since mid-September, 19 Israelis have been killed in Palestinian attacks, mostly stabbings, while at least 115 Palestinians have died by Israeli fire in the same period, 78 of them assailants, according to Israel. The rest were killed in clashes with Israeli security forces.

The Palestinians say the violence, carried out mostly by young attackers in their 20s or teens, is the result of five decades of Israeli occupation, years of failed peace efforts and a lack of hope.

Israeli Prime Minister Benjamin Netanyahu has accused Palestinian leaders of inciting the violence with hostile rhetoric toward Israel. Critics, however, say that Netanyahu and his hard-line allies are fostering a climate that is increasingly intolerant of dissent.

“The minute you have an incitement campaign against people and their opinions … even if people have the legal right to express their opinions, they will be afraid to exercise it,” said Yair Sheleg, a fellow at the Israel Democracy Institute, an independent, nonpartisan think tank.

Among the organizations particularly targeted by hard-liners is Breaking the Silence, a group of former Israeli combat soldiers who criticize the occupation of the West Bank, delivering workshops to Israeli soldiers and students as well as to audiences abroad about what they say is improper or illegal behavior by soldiers against Palestinians.

The group has touched a particularly raw nerve in Israel, where nearly everyone serves and the military is among the country’s most sacred institutions.

Even Israeli President Reuven Rivlin came under intense criticism for merely speaking at a conference in New York last week sponsored by the liberal daily Haaretz because Breaking the Silence also took part. At the gathering, Rivlin praised Israeli soldiers for maintaining “the highest possible moral standard, even under impossible conditions.”

A discussion in Israel’s parliament erupted into a shouting match this week as opposition leader Isaac Herzog blasted Netanyahu for “telling our people we are under siege,” and demanded he denounce the attacks on Rivlin. Groups that express criticism of government policies, Herzog said, are “part of a thriving Israeli society.”

Netanyahu refused to back down. “I want you to stand up at this podium and fully condemn the Breaking the Silence organization, which libels Israeli soldiers around the world,” the Israeli leader demanded.

This week, Defense Minister Moshe Yaalon banned the group from working with soldiers, saying they were welcome to bring their grievances to the military, where he says they will be investigated, but he draws the line at besmirching the army abroad.

Meanwhile, several bills are in the works that would raise scrutiny of foreign-funded advocacy groups.

Lawmaker Yoav Kisch of Netanyahu’s Likud party has proposed legislation that would define organizations receiving grants from foreign governments as foreign agents and ban them from working with the government or army. Kisch says he supports “internal checks,” but the dovish groups were crossing a line by taking their message abroad.

Another draft bill, circulated by Justice Minister Ayelet Shaked, would require representatives of organizations who receive a majority of their funding from foreign governments to wear identification tags declaring their funding when addressing parliament or the public.

Although the proposed legislation would apply to all nonprofits, critics say it is aimed at dovish organizations, which receive donations from foreign governments and agencies, mostly European countries promoting human rights. Hawkish groups supportive of hard-line Israeli policies generally receive donations from wealthy individuals and would be exempt.

Shaked equated the foreign-funded organizations with lobbyists, who also must wear identification tags in parliament.

Last month, four German lawmakers, including one from Angela Merkel’s Christian Democratic Party, urged the draft legislation be dropped as “out of line” with Israel’s democracy. Germany is among several European Union countries that have contributed money to projects by dovish Israeli rights groups.

Im Tirtzu, the group behind this week’s video, has long complained about foreign funding for Israel’s critics. The group’s director, Matan Peleg, said the video targets organizations that tarnish the image of Israel and its soldiers abroad.

Im Tirtzu has come under criticism from some surprising places since releasing the video.

The Anti-Defamation League, a U.S. group that battles anti-Semitism worldwide, called the video “a form of incitement which clearly crosses over into hate speech.”

And Yuval Diskin, a former director of the Shin Bet internal security agency, a frequent target of rights groups, denounced the video as a “populist and inflammatory attack” and “completely unnecessary.”