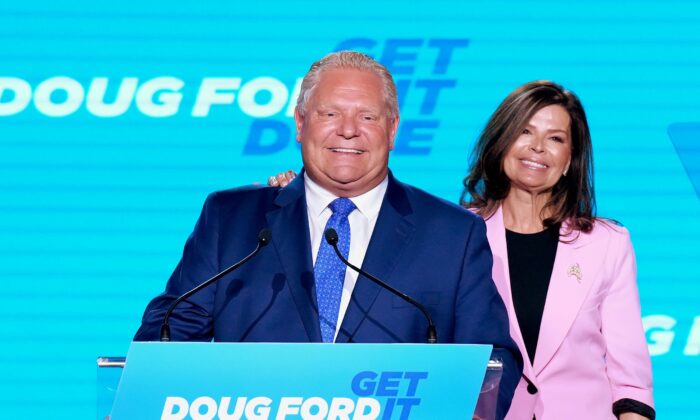 Ontario Premier Doug Ford and wife Karla celebrate onstage after being re-elected in the Ontario provincial election, in Toronto on June 2, 2022. (The Canadian Press/Nathan Denette)
Canada

The Ontario NDP will form the Official Opposition again, while the Liberals, who were in government before the 2018 provincial election, remain in third spot. The leaders of both parties have said they will step down.

The PCs grew their number of seats in the election to 83, an increase of seven seats compared to the 2018 election, while the NDP got 31 seats, losing nine seats compared to 2018 . The Liberals gained one seat compared to four years ago, winning a total of eight seats, while the Greens held on to their single seat.

Thanking the people of Ontario for their vote, Ford centred his victory speech on jobs, in line with the PC’s focus during the election campaign.

“If you are a student who wants to work in the tech sector, we will have a job waiting for you. If you are a newcomer with a degree who can’t get a job in your field, we’ll make sure you can get credentials you need. This is what we’re working for.”

In her own post-election speech, NDP Leader Andrea Horwath said it’s time for her to step down as leader.

“My commitment to you is never going to waver and I’m going to keep working to earn your confidence each and every day,” she said in an emotional speech. “I’m going to keep doing that, but tonight, it’s time for me to pass the torch, to pass the baton, to hand off the leadership of the NDP. It makes me sad, but it makes me happy because our team is so strong.”

This was Horwath’s fourth election as NDP leader.

Liberal Leader Steven Del Duca, who lost his riding of Vaughan−Woodbridge, also said he is stepping down. His party once again failed to win enough seats to secure official party status.

“This isn’t the outcome that we had hoped for, and work hard for,” Del Duca said in his post-election speech, adding that he was disappointed that he didn’t win the seat in his own riding.

Green Party Leader Mike Schreiner was re-elected in Guelph, allowing the Greens to maintain one MPP in the legislature.

Independent candidate Bobbi Ann Brady won in the riding of Haldimand-Norfolk with over 35 percent of the vote, ahead of the PC contender with 30 percent. Brady used to be executive assistant to the riding’s former MPP Toby Barrett, who was a PC. Barrett supported Brady’s campaign.

Voting at some polling stations was extended, in some cases by as much as two hours beyond the 9 p.m. deadline, due to delays in the start of voting and technical issues.

More than one million people voted in advance polls, with a sharp rise in mail-in ballots compared to the 2018 election.

Among the issues the parties campaigned on were housing and cost of living, as the country faces inflation figures at three-decade-high levels.

In a pre-election budget tabled in April, Ford promised billions of dollars of spending on infrastructure projects and outlined a tax credit for low-income earners. During the campaign, the PCs promised building more homes and said they are removing tolls on some highways.

The NDP focused their campaign on a pharmacare program for all Ontarians, hiring and training more nurses, raising the minimum wage, and building more affordable homes.