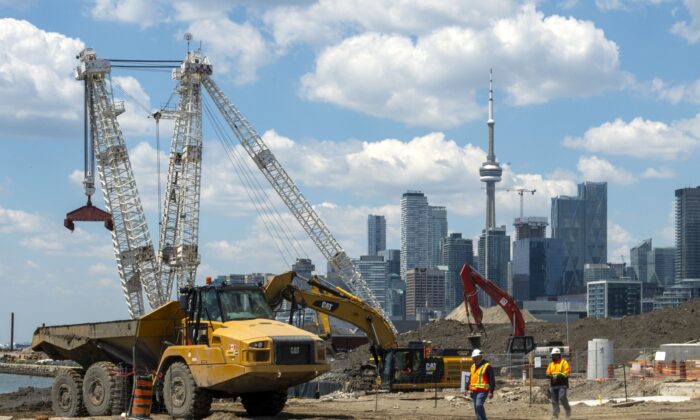 During the Ontario election campaign, the Progressive Conservatives (PCs) have been able to capture considerable support from trade unions, something usually associated with the NDP, which has traditionally pursued the blue-collar vote.

Going into the June 2 election, eight trade unions had endorsed the Ontario PCs, a landmark in the province’s political history.

“This does not surprise me a great deal,” says Scott Bennett, a political science professor at Carleton University, noting that the PCs have been courting the union vote as part of their goals for the province’s economy.

“With this strategy for rebalancing the economy, one needs to have allies in the labour force who will benefit from the general direction of new policy, and those allies will support the PCs, at least in official terms,” he said in an interview.

While many trade unions, particularly those in the construction sector or people who work very closely with the trades, are on board with the PCs, most public sector unions don’t support the party or Doug Ford’s government.

“No major public sector or near public sector unions are supporting the PCs, because they know they represent the part of the economy that the PCs want to de-emphasize,” Bennett said.

“Unions relating to education, health, social services, and so forth are mostly supporting the NDP. There are also some overarching federations of unions that seem to still be leaning to the left.”

Under Bill 124, which was enacted in 2019, public sector wages are limited to 1 percent annual growth. This has given one more reason for the Ontario Public Service Employees Union, which represents 180,000 members, to support the NDP. The Ontario Secondary School Teachers’ Federation has endorsed candidates for 47 of the province’s 124 ridings as of May 31. Among those candidates, eight are Liberal, one is Green, and 38 are NDP. And the Ontario Federation of Labour, which has been even more active, has hosted many local events in support of NDP candidates.

“There has traditionally been a more conservative bent to the trades and their unions compared to other unions, but this has been nurtured and greatly improved to the benefit of the Ford government,” Bennett said.

Nelson Wiseman, professor emeritus of political science at the University of Toronto, says labour support for the PCs is limited to the private sector, and even then it is only as consistent as economic growth.

“The NDP was officially the political arm of labour, and it still is, although some of those ties have been fraying and the main reason is because the nature of the union movement in Canada has changed. Private sector unions have been losing status,” Wiseman told The Epoch Times.

“It’s not a lasting shift [for the PCs],” he says of the trade union support.

“All you need is a downturn in the economy. If we go into recession, and a lot of these unions don’t get the same kind of work and a lot of their employees are laid off, they, like large other parts of the public, will be unhappy with the government. But right now things are OK for those unions.”

The Ontario Pipe Trades Council, which represents 10 local unions with a membership of over 22,000 workers, such as plumbers, steamfitters, and welders, was among the first to endorse the PC’s, doing so in a press release on May 18. The release cited the Ford government’s extensive consultation with industry and millions of provincial tax dollars directed to safety and training programs for the pipe trades.

The International Association of Sheet Metal, Air, Rail and Transportation Workers Local Union 285 endorsed the PCs saying it’s because for their efforts to address the labour shortage in the skilled trades. The union praised the government’s streamlined processes for trades apprenticeship and certification, the $114.4 million over three years put into the Skilled Trades Strategy to help more apprentices enter the trades, and $15.8 million to the Skills Development Fund for 2022–23 to expand training facilities.

Wiseman says there were “some divisions in the union movement” because the overall organization didn’t endorse Ford.

“There has been talk about the NDP severing its ties with the union movement, but I think that was just loose talk,” he adds, “because the NDP itself was and still is formally a merger of the old CCF [Co-operative Commonwealth Federation] and the Canadian Labour Congress. And unions continue to have special status at NDP conventions. They’re entitled I think to 25 percent of all the delegates.”

Editor’s note: An earlier version of this article attributed a quote to Scott Bennett instead of Nelson Wiseman. The Epoch Times regrets the error.