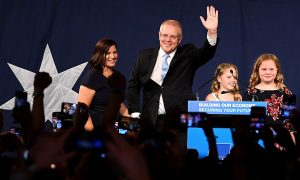 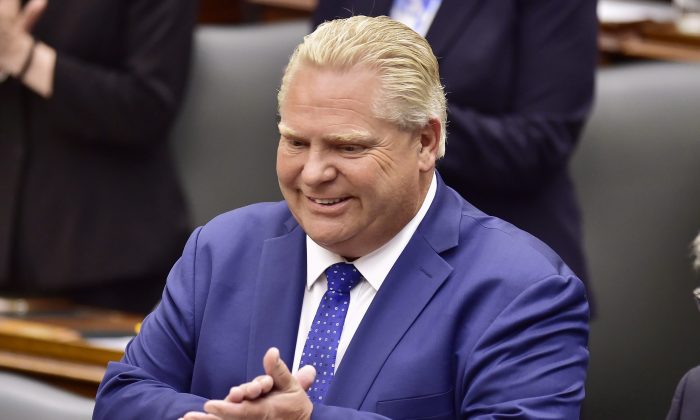 Ontario Premier Doug Ford at the Ontario legislature at Queen’s Park in Toronto on on June 12, 2018. (The Canadian Press/Frank Gunn)
Canada

LUCAN, ON—Ontario’s premier says he believes Boris Johnson will do a “great job” as Britain’s next prime minister.

Doug Ford praised the new leader of Britain’s Conservative Party at a news conference in Lucan, ON., Tuesday morning.

“He’s got a big job turning that around, it’s quite a nightmare over there, but I think the people of the U.K. are going to support him,” Ford said.

“He’s a no-nonsense type of person, he’s going to get the job done.”

Ford said he would like to meet Johnson if he ever travels to the United Kingdom, adding he has “always” liked the British politician, who previously served two terms as mayor of London.

Prime Minister Justin Trudeau also sent his congratulations in a tweet that said he looked forward to working with Johnson “to keep the close friendship between Canada and the U.K. strong and to increase trade and create more jobs for people in both our countries.”

Congratulations, @BorisJohnson – I look forward to working with you to keep the close friendship between Canada & the UK strong and to increase trade and create more jobs for people in both our countries.

Johnson, a vocal champion of the Brexit plan to lead the U.K. out of the European Union, overwhelmingly defeated rival Jeremy Hunt to lead the Conservatives in a vote of party members.

He is also set to succeed Theresa May as prime minister on Wednesday.

Thank you all for the incredible honour you have done me. The time for campaigning is over and the time for work begins to unite our country and party, deliver Brexit and defeat Corbyn. I will work flat out to repay your confidence

The victory is a triumph for the 55-year-old Johnson, an ambitious but erratic politician whose political career has veered between periods in high office and spells on the sidelines.

Johnson has vowed that Britain will quit the European Union, “come what may,” on the scheduled Brexit departure date of Oct. 31 even if it means leaving without a divorce deal.

But he faces a rocky ride from a parliament determined to prevent him from taking the U.K. out of the bloc without a withdrawal agreement.

Congratulations to Boris Johnson on becoming the new Prime Minister of the United Kingdom. He will be great!