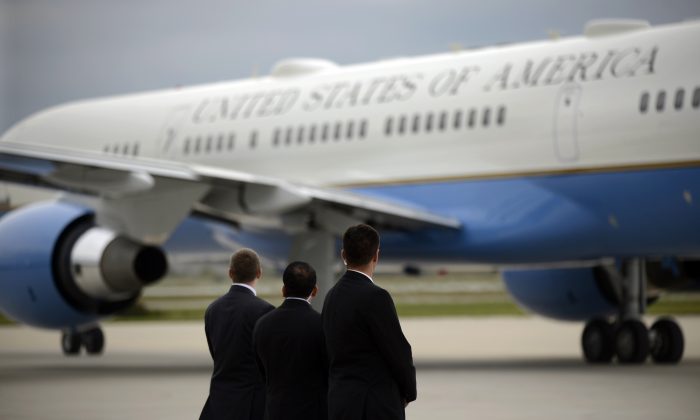 Members of the Secret Service watch as Air Force One taxies on the runway before leaving the Gary/Chicago International Airport in Gary, Ind., on Oct. 2, 2014. In the space of just a few months, the reputations and approval ratings of the Centers for Disease Control and Prevention, Secret Service, as well as the Veterans Administration, have been seen a decline. (AP Photo/Paul Beaty)
US

Doubts Chip Away at Nation’s Most Trusted Agencies

Even as Americans’ trust in government eroded in recent years, people kept faith in a handful of agencies and institutions admired for their steadiness in ensuring the country’s protection.

To safeguard the president, there was the solidity of the Secret Service. To stand vigil against distant enemies, the U.S. nuclear missile corps was assumed to be on the job. And to ward off threats to public health, the nation counted on the Centers for Disease Control and Prevention.

Now, in the space of just a few months, the reputations of all those agencies — as well as the Veterans Administration — have been tarred by scandal or tarnished by doubt. Maybe a public buffeted by partisan rhetoric and nonstop news should be used to this by now. But, with the CDC facing tough questions about its response to the Ebola outbreak, something feels different. Government is about doing collectively what citizens can’t do alone, but its effectiveness is premised on trust.

A year ago, with Washington shut down and trust in government near records lows, the CDC still won a 75 percent approval rating, the highest of any federal agency, a poll by the Pew Research Center found. But when CBS News surveyed Americans in mid-October, just 37 percent said theagency was doing a good or excellent job.

“I always called the CDC the shining star of the federal agencies,” said Lawrence O. Gostin, an expert on health law and policy at Georgetown University. “They were regarded with very high esteem and did an extraordinarily good job of protecting the American people. That has changed and I think (doubts about its handling of) Ebola is the epitome of that change.”

That likely reflects the fears stirred by the disease — while people trust public health officials ordinarily, there is a heightened sensitivity now to perceived breaches in that confidence, said Nathan Carter, a University of Georgia psychology professor who has looked at declining trust in institutions over the last four decades.

But the speed with which the agency was held up for blame also reflects the overall degradation intrust, he said. The public and elected lawmakers are far less likely now than in the past to give government officials the benefit of the doubt or the room to make mistakes.

Faith in government has been declining since the Vietnam War and Watergate, with most of that distrust directed at elected officials, said Carroll Doherty, director of political research for Pew.

The balance between trust and doubt has swung increasingly toward the latter, Carter said. “I do think it’s a big problem and how to repair that trust, that’s probably the biggest question.”

The public’s positive views of the CDC go back many years. But the results of last year’s poll by Pew are particularly striking now because many of the other agencies atop the rankings then have also since been tarnished.

The Homeland Security Department won a 66 percent approval rating a year ago. But that was before the Secret Service, which is a part of the agency, was caught in a number of lapses: among them, the agency’s failure to stop a man armed with a knife from scaling the fence and running into White House and the unchecked entry of an armed contractor onto an elevator with the president. In the new CBS news poll, just 38 percent of those questioned rated the Secret Service’s performance as good or excellent and 43 percent did so for its parent department.

The Veterans Administration was viewed favorably by 68 percent of those polled last year. But it too has since been swept up in a scandal over long wait times for veterans seeking care and records that were falsified to camouflage the problems. In the CBS poll, just 30 percent rated the VA as doing a good job.

It’s impossible to know if the public’s misgivings about the agencies are just temporary setbacks, and results from different polls may not be directly comparable. Researchers point out that Americans’ views of government swing back and forth, depending on what’s happening with the economy and national security.

It’s certainly not the first time that the CDC has been targeted for criticism. In 1976, when nearly 200 people who’d attended an American Legion convention in Philadelphia fell ill and more than two dozen died, the agency was criticized for being slow to find the cause.

Over the years, the agency has had some “rough days,” said Elizabeth Etheridge, author of “Sentinel for Health: A History of the Centers for Disease Control,” published in 1992. “It’s not unusual for the CDC to be involved in controversies. Medicine, as you know, is not perfect.”

U.S. voters have long shown a split personality when it comes their views on government. More and more people distrust a government symbolized by a deadlocked Congress. But many have continued to vest considerable trust in the agencies, programs and government workers delivering the services people count on.

“I think it’s actually an enormously important disjuncture,” said Marc Hetherington, a Vanderbilt University political scientist who studies voter trust. “Government has a really bad reputation, but no one wants to do away with any of it.”

The nation’s deepened partisan divide has further undermined that trust. Republican voters are more suspicious of government led by the current Democratic president. Democratic-leaning voters were deeply distrustful of the government when it was led by George W. Bush, researchers say.

Ahead of next week’s midterm elections, polls show many voters deeply dissatisfied with government’s performance and ready to place blame on President Barack Obama and his party’s candidates.

But Carter said data on public trust over time is worrisome because it shows that even when events like the Sept. 11, 2001, terrorist attacks rally people around the government, the peaks oftrust are never as high as in the past. It points to a gradual but unmistakable degradation in the public’s belief in its institutions that he finds worrisome.

If Americans’ belief in their government continues to ebb, he said, its raises the inevitable question: How long before trust runs out?