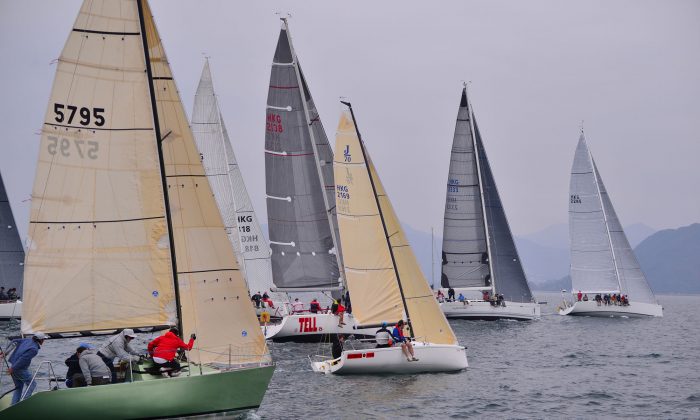 Light winds were the order of the day for Race-3 and -4 of the 10-Race Hebe Haven Yacht Club Spring Saturday Series held at Shelter Cove on Saturday Mar 15.

While the three regular boat categories (IRC, HKPN and Sports Boats) took part, Dragons, which run their own separate competition, also joined in.

The wind stayed at about 7-knots for the whole of Race-1 and then died to almost nothing at times for Race-2. Race Officer Leslie Hickman shortened the second race to one circuit instead of two, but it was still painful sailing at times.

Interestingly, those boats that took a course down the port wing to the leeward mark seemed to find more wind, but as soon as they approached the bottom mark most boats had great difficulty rounding it.

HKPN
“Bits and Pieces” did her usual trick of being first over the line in the HKPN category, taking double line honours.

“Getafix” came third in Race-3 but retired from Race-4.

Sports Boats
Steve Bourne in “Merlin” came out on top in both Sports Boat races finishing more than 3-minutes ahead of nearest rival Sam Chan helming “It’s My Pleasure” in Race-3 and nearly 2-minutes in Race-4.

Meanwhile, Howard Winn in “Good Vibrations” had a good race day coming in third in both races.

It was interesting to see “Merlin” well in the lead coming to the leeward mark in Race-4, but becoming becalmed some 50 metres short of the mark with Chan catching fast under good sail, but Bourne finally got his boat moving to complete the course and take the win in fine style.

Dragons
“Zephyr” had a double first in the Dragon Division with “Shiva” second in Race-3 and “Kamloong” third.