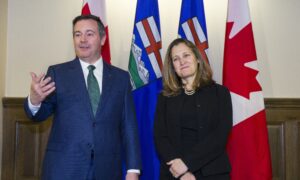 Will Cabinet Approve New Oilsands Mine Despite Trudeau’s ‘Net-Zero’ Promise?
0 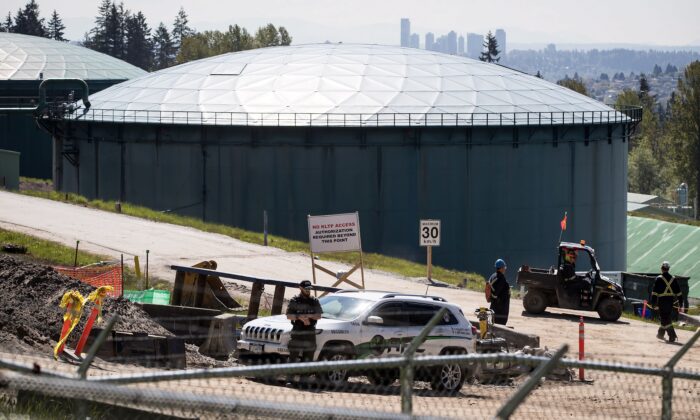 A security guard stands nearby during construction work at the Kinder Morgan tank farm, the terminus point of the Trans Mountain Pipeline, in Burnaby, B.C., on April 30, 2019. (The Canadian Press/Darryl Dyck)
Canada

Neither fossil fuels nor public revenues are flowing very well in Canada. Reports of low investor confidence in Canadian oil and gas recently converged with news of the worst federal deficit in the country’s history.

On July 8, the federal government announced its dire economic snapshot. It expects the economy to tank by 6.8 percent in 2020—the greatest drop since the Great Depression. A $343 billion federal deficit will push all-time debt past $1 trillion in 2021.

Two days earlier, a report from Global Energy Monitor highlighted 13 liquefied natural gas (LNG) pipelines that were cancelled or suspended in recent years. Among these is Warren Buffett’s company Berkshire Hathaway, which in March withdrew a planned $4 billion investment in an LNG export terminal in Saguenay, Quebec. The company cited “the current Canadian political context” for the decision.

“There were a ton of people who put projects forward saying we want to take advantage of the spread that exists between Asian gas and North American gas,” Leach said.

“The one exception is probably the Petronas project that ran up against regulatory roadblocks, but … if you look at Asian gas prices right now, the outlook is not what it was when people started pitching those projects.”

In January of 2016, Malaysian company Petronas was told by the federal government that its proposed $27 billion LNG export terminal on the British Columbia coast would face an additional assessment on “direct and upstream greenhouse gas emissions.” The company, which had already spent $12 billion on the project, abandoned it altogether in 2017, citing “prolonged depressed prices and shifts in the energy industry.”

“I don’t know the details of whether those delays were legitimate because of politically challenging technical issues, but my impression was that it was kind of political in that they didn’t want to take the decisions that might have accelerated development of those LNG projects,” he says.

“It was kind of a race between many facilities—in the United States and Australia in particular—to lock in those arrangements, and B.C. has missed the boat on much of it. So if we get one, that would I think be the optimistic scenario right now.”

Despite massive protests, construction continues on the $6.6 billion Coastal GasLink pipeline project in B.C., which will transport LNG from Dawson Creek to a $40-billion terminal being built in Kitimat. The 670-kilometre pipeline passes through Wet’suwet’en territory and faced a blockade by hereditary chiefs and other protestors in January.

Leach says the constitutional rights of Indigenous people are a substantial hurdle that federal governments of any political stripe must face.

“The government cannot legislate around Section 35 in the Constitution. The declaratory power doesn’t actually give the government power to get something built,” he says.

“Everyone holds their magic wand and says Trudeau should have waved this, but nobody will ever tell you what ‘this’ is. … There’s no legislative trick that gets you around the Constitution.”

During the Harper Conservative era, the Northern Gateway pipeline project was blocked by courts due to inadequate consultation with Indigenous Peoples. Under the Trudeau Liberals, the TransMountain Pipeline expansion faced a similar setback, but was subsequently re-approved.

On July 2, the Supreme Court of Canada dismissed an appeal from four First Nations to block the TransMountain expansion once again. Tombe says it proves pipeline passage is possible.

“They brought in a former Supreme Court judge to oversee and guide that process and that one turned out to be successful, suggesting that there are routes that you can go through as long as you ensure you are taking it seriously, fully executing your responsibilities,” he says.

The inability for Canada to get its oil and gas overseas means the United States pays far less for it, since Canada has nowhere else to send it. Josh Nye, chief economist at Royal Bank of Canada, says that’s less of an issue lately.

“Those oil price differentials have actually decreased quite a bit, so western Canadian producers are not facing the significant discounts that they saw for periods in 2018 and 2019. That’s really a reflection of pipeline capacity at this point not necessarily being an issue,” he says.

Still, the west is struggling to adjust. Nye expects oil-producing provinces to underperform through to the end of 2021.

“Western Canadian producers have had to cut production or bring forward maintenance shutdowns because oil prices are so low, and they’re facing cash flow issues because of that,” he says.

A report by Scotiabank in 2018 estimated that the lack of pipelines is costing the Canadian economy more than $15 billion per year. Authors Jean-Francois Perrault and Rory Johnston called this a “self-inflicted wound.”

“The sooner governments move to allow additional pipeline capacity to be built, the better off Canada will be,” they wrote.