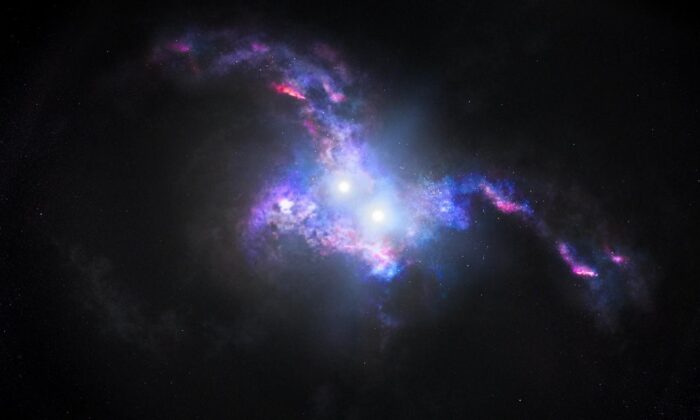 An artist’s illustration of two bright quasars and their host galaxies colliding into each other. (NASA, ESA, and J. Olmsted (STScI))
Space

Peering back 10 billion years into the universe’s history, astronomers found a pair of quasars that appear to be a single object. But with the crisp view provided by the HST, the pair can be resolved as two quasars very close to each other, according to a statement.

The research team believes the double quasars reside in the cores of two merging galaxies.

Quasars are powered by supermassive black holes at the centers of galaxies. The black holes actively devour nearby materials, and this strong accretion process unleashes a tremendous amount of energy in the form of radiation, easily outshining the entire host galaxy.

“We estimate that in the distant universe, for every 1,000 quasars, there is one double quasar. So finding these double quasars is like finding a needle in a haystack,” lead researcher Yue Shen of the University of Illinois at Urbana-Champaign said in the statement.

The researchers believe that the new discovery can help with probing galactic collisions and the merging of supermassive black holes in the early universe.

Current cosmological models suggest that quasars were most abundant 10 billion years ago. There were also a lot of galaxy mergers back then. Therefore, astronomers believe there were many double quasars during that time.

“This truly is the first sample of dual quasars at the peak epoch of galaxy formation with which we can use to probe ideas about how supermassive black holes come together to eventually form a binary,” said research team member Nadia Zakamska of Johns Hopkins University in Baltimore, Maryland, in the same statement.

Quasars play an important role in galactic collisions. As two galaxies move close and distort each other gravitationally, their interaction funnels interstellar medium into supermassive black holes at their cores, igniting their quasars.

The strong radiation then launches powerful galactic winds, which sweep out most of the gas from the merging galaxies. Without enough gas, star formation stops, and the galaxies become elliptical.

“Quasars make a profound impact on galaxy formation in the universe,” Zakamska added. “Finding dual quasars at this early epoch is important because we can now test our long-standing ideas of how black holes and their host galaxies evolve together.”

The HST showed that the quasars in each pair are only about 10,000 light-years apart. By comparison, our Sun is 26,000 light-years from the center of the Milky Way, the statement explained.

The pairs of host galaxies will eventually merge, and then the black holes also will coalesce, resulting in an even more massive black hole.

Researcher Xin Liu of the University of Illinois at Urbana-Champaign said the Hubble confirmation was a “happy surprise,” according to the statement. She has also hunted for double quasars closer to Earth using ground-based telescopes, the statement reported.

“The new technique can not only discover dual quasars much further away, but it is much more efficient than the methods we’ve used before,” she said in the statement.

While galactic mergers were frequent billions of years ago, there are very few today. One example, which has been dubbed NGC 6240, is a nearby system of merging galaxies that has two or possibly even three supermassive black holes.

In addition, a few billion years from now, our Milky Way is expected to collide with the nearby Andromeda galaxy.

The new study is described in a paper published in Nature Astronomy.