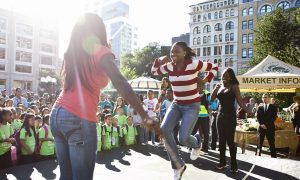 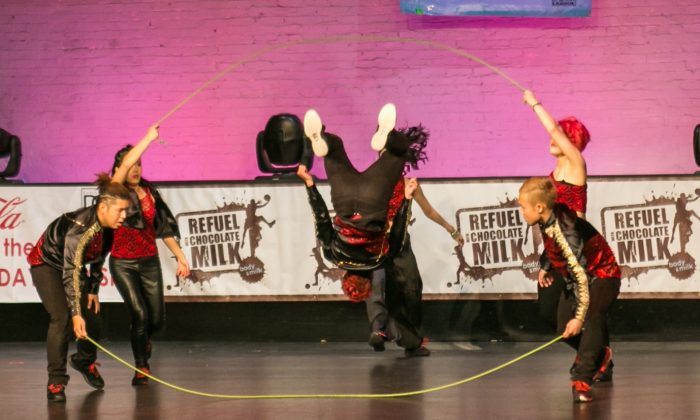 NEW YORK—Children as young as five were competing in the 23rd Double Dutch Holiday Classic tournament at the world-renowned Apollo Theater in Harlem, but the sport is far from the simple jump-roping games played on the streets.

“It’s dance, it’s gymnastics, it’s tricks,” said Everly Jones. Jones is 20, and has been jumping Double Dutch since she was in the fourth grade. Her team Jazzy Jumpers, from Brooklyn, meets for five hours a day, four times a week.

“It’s really challenging,” Jones said. It is also the most fun and best team experiences she’s ever had.

Double Dutch is an exercise where two people turn two ropes in opposite directions at the same time—like an eggbeater—and another jumps between them.

On stage, jumpers first do a compulsory test: left-foot turns, right-foot turns, crisscrosses, and high steps. Then there’s a two-minute speed drill. Three or four teams take the stage at a time, and judges and assistants with timers surround them.

Or, like Jones, they compete in the “fusion freestyle” portion, where each group choreographs a fast-paced jump rope performance to music.

From Streets to Stage

Apollo Theater is home to competitive “fusion” Double Dutch. It was founded in 1992 by David A. Walker, who turned the simple game into an international sport.

In the 1970s, police detective Walker witnessed young girls playing Double Dutch in the streets. The game had come to New York along with its earliest settlers. When the English arrived in New York (then New Amsterdam) and saw Dutch children playing the skipping-rope game, they dubbed it Double Dutch.

In 1973, Walker started the Double Dutch tournament and drew 600 participants. Today, over 100,000 students compete worldwide for spots at national and international competitions.

David Walker passed away in 2008, but his daughter Lauren Walker continues his legacy, and holds the tournaments in his honor.

“Double Dutch started as recreation, and now it’s a competition. Just to remind people we’re still here … to keep the sport in our urban communities,” said Lauren Walker, president of National Double Dutch League. “In this day and age of video games and TV shows, kids are not as active as they were before.”

The organization invites teams from around the world and tries to take the top three teams from every global federation. It has grown from being a mostly female sport to a truly co-ed one, she adds.

“It’s important to me to keep reminding kids of the culture, and their parents, that you can still jump Double Dutch as competition, and it’s healthy competition, I’d say,” Walker said.

Double Dutch, like handball and basketball, is very much an urban game.

Twanda Floyd from New Jersey said, growing up in the ghetto, the children go through all kinds of difficulties that can easily pull them astray. But Double Dutch saved her daughter and niece.

“They’ve been doing this since they were babies. Five years old,” Floyd said. They, like other children, started jumping at the Ward’s Boys and Girls Club. But unlike the other children, once they started, they did not stop. “It kept them out of trouble, it kept them focused, and it kept them determined to go even higher. They weren’t just running through ropes, they were running to their future.”

Her daughter Shaquannah Floyd and her niece Laila Little, now in their late 20s, have started their own company FloydLittle Double Dutch to coach young students. Their teams came to the tournament with a large crowd of supporters who cheered all the competitors on.

“It’s a powerful sport, it comes from the streets. And it’s grown big—it’s worldwide.” Floyd said.

Japanese teams have won the tournament several times, and while Double Dutch is still by any stretch a mainstream sport in Japan, it is wildly popular with a select minority.

“In Japan a lot of college students and people in their 20s do it,” said Yuki Tanaka, 26, through a translator. He still remembers the excitement and movement from watching a fusion performance years ago, and how it inspired him to pursue the team sport.

Eventually, five years ago, he was able to perform on stage at the Apollo Theater. This year, he sat with his students, pointing out legends in the Double Dutch world and cheering the kids on.

“The Apollo Theater is a dream, a big goal, for a lot of [Double Dutch jumpers] in Japan,” Tanaka explained. Tanaka now coaches elementary and middle school students at his company called Branch. “I want to share that experience and excitement with the kids.”

The main competition in Japan is the Double Dutch Delight, and the top three winning teams from that get to come to the Apollo Theater.

“Right now I feel amazing! The Apollo Theater is my dream, and it was so much fun,” said Yurina Nakamura, coming out from back stage after performing fusion freestyle choreographed to 90s pop music with her team Altavista from Shiga, Japan. They had placed third in the 2014 Double Dutch Delight.

They are all juniors in university now, and had met at the Double Dutch club as freshmen. “This is our last performance,” Nakamura said.

Nakamura was a dancer, and the other members all played different sports. No one had any experience at the beginning, but a performance Nakamura saw inspired her to join the club. It looked even more exciting than dancing.

The university club has no coach, so the seniors pass on what they know and each team puts everything together themselves, from choreography to costumes.

“We cannot do Double Dutch alone. We’re just like a family. We can say anything to each other,” Nakamura said. “It’s all about the team.”