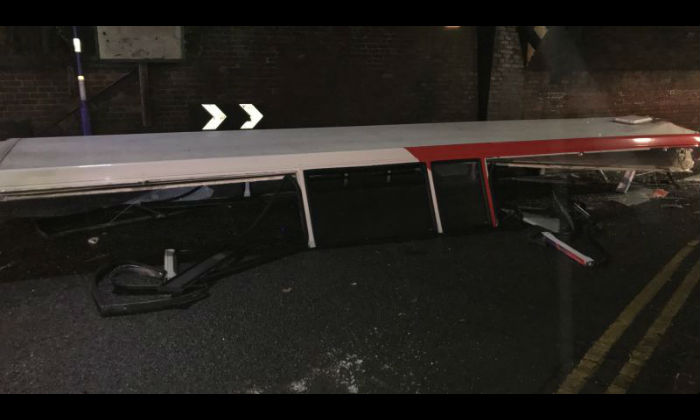 The bus collided into a bridge and its entire roof came off on Wednesday night, Dec. 20. (West Midlands Ambulance Service)
UK

The top of a bus was completely sliced off as it passed under a low railway bridge on Wednesday night, Dec. 20.

The collision left the entire roof of a double-decker bus lying on the side of a road in the village of Bournville, Birmingham.

Luckily, no passengers were on board at the time of the crash and the driver, in his 30s, was uninjured.

Ben Pallante, a West Midlands paramedic tweeted he had a “slightly different end” to his shift on Wednesday night.

He added, “We responded to reports of a bus vs bridge in south Birmingham, upon arrival a double decker bus had gone through a bridge, totally removing the upper deck and roof. Thankfully no customers were on board and the driver had no injuries.”

“It was incredibly lucky that the bus was empty as it could’ve resulted in a very serious or even fatal incident,” a spokeswoman from the West Midlands Ambulance Service said, MetroNews reported.

The bridge near Cadbury World has a warning sign for a 10-foot (3m) height limit.

A fire crew who was on the scene described the smash as: “Double decker v bridge. Bridge wins”