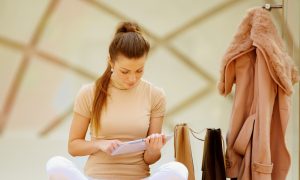 Doris Raymond of ‘L.A. Frock Stars’ on the Anthropology of Vintage

Raymond has been buying and selling vintage clothing for over 30 years. In a telephone interview she spoke to Epoch Times recounting her humble beginnings and talking about her great love of fashion.

As a teenager, she began to buy vintage clothing at thrift shops, at a time when buying second-hand clothes was not fashionable and when vintage was something that people would not admit to wearing, even if they did. Her addiction (for lack of a better word) started out as a necessity and grew from there.

‘The Way We Wore’

Now Raymond and her boutique, “The Way We Wore,” are the subject of a fascinating television series called “L.A. Frock Stars” with its second season airing from March 19 on the Smithsonian Channel.

20 Vintage Flower Prints for a Moment of Delicate Beauty

To love fashion is to love color, the tactile qualities of interesting materials, design, and there’s also a frivolity that goes along with it. But there’s nothing frivolous about the multibillion dollar fashion industry that has shaped economies around the world and which has historically also bestowed cultural identity. This is a moot point for fashion lovers—consumers and designers alike.

As a former student of anthropology at Boston University, which Raymond attended for only one year, this aspect is very much a driving force.

“That’s the thing about fashion that I love, which is the sociological [aspect]. Vintage clothing is truly a form of social anthropology because it captures a moment in time, and it tells you so much about what was going on in society at the moment the garment was created,” Raymond  said in one of the upcoming episodes of “L.A. Frock Stars.”

Unlike a museum curator specializing in the preservation of textiles and fashion, Raymond is in the enviable position of being able to find, own, and pass on vintage garments seeing them take on new life when they are worn again.

Vintage clothing is truly a form of social anthropology because it captures a moment in time.
— Doris Raymond

The series documents Raymond’s sartorial adventures hunting for pre-owned and rare outfits and accessories with her usual charm and laser-sharp eye for unique and valuable pieces. Some will inadvertently grace the wardrobes of celebrities such as Adele, Rihanna, Angelina Jolie, Anne Hathaway, Kat Dennings, Dita von Teese, to name a few who have worn Raymond’s garments.

And there is still more to be said about the value of vintage fashion. Among other things, film is a unique art form where anthropology and entertainment meet to help us understand a specific period of time. Not surprisingly, Raymond has also supplied wardrobe for numerous film and television productions, including “Mad Men,” “Boardwalk Empire,” and “American Hustle.”

In the first episode of Season 2, we get to see Raymond at Whitaker Auction in New Hope, Pennsylvania, where, among other garments, the New York Metropolitan Museum of Art is auctioning a few 18th-century (Rococo period) men’s jackets. Some have exquisite embroidery and Raymond wins the bids on two—one of them being a silk taffeta jacket with intricate floral embroidery.

She explained in the interview that sometimes when museums have duplicates they will deaccession items in a public forum, which is legal requirement.

Fashion is art on many levels.
— Doris Raymond

A large part of the charm of the series lies in the fact that Raymond, who is armed with such rich knowledge about fashion design, can sum up a garment’s worth in pragmatic terms, yet she wears her heart on her sleeve when she finds a rare and beautiful piece. At the sight of a Dior couture gown she says: “If you had a microphone on my heart you would hear it starting to race.”

Her boutique is a beehive of activity where celebrity stylists drop in as much as fashion designers who look for inspiration from Raymond’s huge collection of rare books and materials from the 1800s and 1900s—swatches, textiles, prints, woven fabrics, and ribbons.

The pleasure in watching the show also comes from Raymond’s side-kicks—store manager Sarah Bergman and sales associate Shelly Lyn, as well as assistant store manager Angelika Sjostrom. They have such in-depth knowledge of fashion history that they sometimes seem to be bursting at the seams—pun definitely intended, to bestow that on clients with cheeky humor and great enthusiasm.

Ultimately the show is a great reminder of how important fashion can be in creating a persona and sculpting the human body to dramatic effect.

As Raymond says in one episode, “Fashion is art on many levels and when I find artistic pieces, that really rings my bell,” and shopping vintage provides access to great wearable art.

For best places to shop vintage around New York visit: