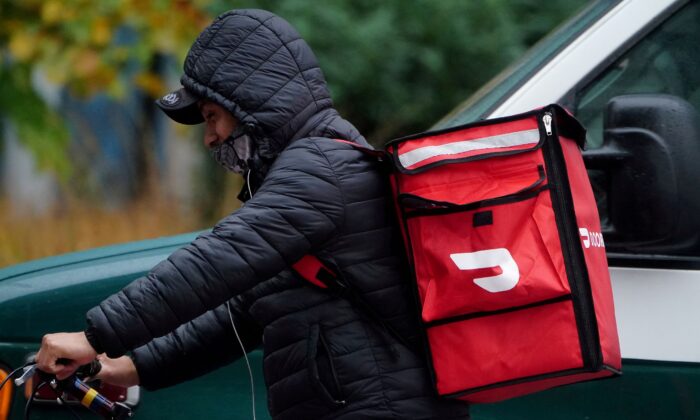 A delivery person for Doordash rides his bike in the rain during the COVID-19 pandemic in the Manhattan borough of New York City, N.Y., on Nov. 13, 2020. (Carlo Allegri/Reuters)
NY News

DoorDash and two other delivery service companies are suing New York City for capping how much they can charge restaurants.

The city in May 2020 enacted caps presented as temporary on the rate that third-party platforms like DoorDash could charge restaurants. The law was slated to expire 90 days after on-site dining was allowed again. But the price controls were extended three times. The third was the passage of a law that would make the caps permanent.

“This now-indefinite legislation bears no relationship to any public-health emergency, and qualifies as nothing more than unconstitutional, harmful, and unnecessary government overreach that should be struck down. The Ordinance is unconstitutional because, among other things, it interferes with freely negotiated contracts between platforms and restaurants by changing and dictating the economic terms on which a dynamic industry operates,” the service platforms said in their lawsuit, which was filed late Thursday in federal court in Manhattan.

A similar lawsuit was filed by DoorDash and Grubhub against a cap on fees in San Francisco in July.

The Democratic-controlled New York City Council passed the law in question last month. The law aims to prevent third-party food delivery services from charging restaurants more than 15 percent per order and would also cap the services from adding more than 5 percent per order for all other fees, excluding transaction fees, in addition to charging more than 3 percent for transaction fees.

The bill would also require the city to report to the mayor and council speaker every two years recommending either the maintenance or adjustment of the fee caps.

New York City Mayor Bill de Blasio, a Democrat, has yet to act on it.

De Blasio’s office did not respond to a request for comment.

A spokesman for New York City’s Law Department told The Epoch Times in an email that the law “is legally sound and we’ll defend it in court.”

Councilman Mark Gjonaj, chairman of the city’s Small Business Committee, told news outlets that the law and others like it “simply seek to bring fairness to a system that all too often lacks it.”

“You can’t expect any better out of these greedy, out of touch, and unscrupulous billionaire companies,” added Councilman Francisco Moya, a Democrat who introduced the law that would make caps permanent. “These companies exploited mom-and-pop shops long before the pandemic and want to continue to exploit the most vulnerable during and post COVID. From the onset, they had the opportunity to do what’s right and stand by small business owners like we do, and they still can. We need to stand by small business owners so these abuses don’t happen again.”