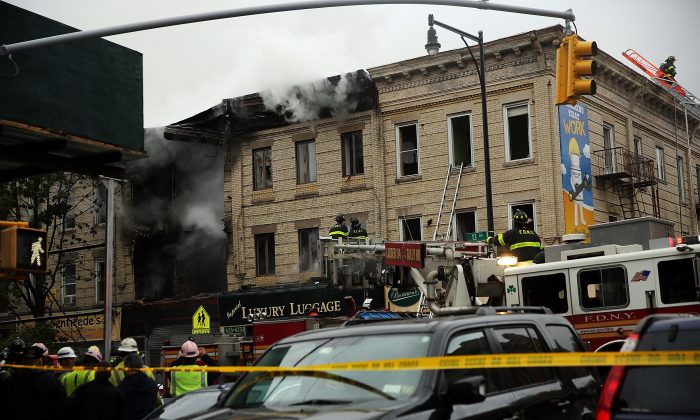 A gas explosion occurred in Borough Park neighborhood on October 3, 2015 in the Brooklyn borough of New York City. Over 100 firefighters responded to the afternoon explosion and fire in the densely populated neighborhood. Two people were killed. (Spencer Platt/Getty Images)
New York

NEW YORK—On the quiet Saturday of Oct. 3, a tenant in Brooklyn disconnected a gas pipe so she could remove a luxury stove. An explosion ensued, demolishing the building’s facade and collapsing its framework.

The Fire Department of New York (FDNY) said the tenant who allegedly caused the explosion was moving. The tenant had personally purchased the luxury stove and wished to bring it to her next apartment.

Although this particular explosion in Brooklyn was not caused by a corroding gas pipe, it’s a stark reminder of how easily an explosion could occur if the slightest bit of electricity drifted in the air and mixed with a room full of gas.

In a city that is heated by 6,362 miles of aging natural gas pipes, residents should be aware that seemingly innocuous actions—such as using a home phone or cellphone—could ignite an explosion if gas is in the air.

According to the websites of energy companies, one should leave the premises immediately if one smells gas and call 911 only after leaving the building.

If there is a gas leak, even ringing the doorbell can cause can an explosion. So could starting a hair dryer, or turning on the lights.

“It’s because it’s all electrical,” said Con Edison spokesman Sidney Alvarez. (Con Edison was not responsible for distributing gas to the Brooklyn building; the National Grid was, but could not be reached by press time).

Any electronic usage could spark an explosion. If one smells gas, don’t turn on a flashlight, and don’t use anything that requires batteries. If one has a car in a home garage, do not start the car.

Such warnings are especially pertinent now because New York City’s gas pipes are decaying. Con Edison’s gas pipes are 53 years old on average, according to a 2014 report from the Center for an Urban Future, a think tank based in Manhattan.

Con Edison is currently replacing an average of 65 miles of gas piping a year, according to its website.

Given that context, gas explosions are still relatively rare but an array scenarios could set off an explosion making for a literally volatile situation.

In August, a gas explosion that occurred at a Bronx high school injured three workers. A worker lit a match without realizing the room was filled with gas because he had become desensitized to its smell, reported NBC.

In March, two died in an East Village explosion because a commercial gas line was illegally siphoned for residential use.

In 2014, an East Harlem blast killed eight due to poor infrastructure and because no one reported the smell of gas.

In 2009, a house in Queens exploded because of faulty electrical wiring.

“If you go back to Park Avenue [Harlem] it was a structure issue. If we go to Second Avenue it was a piping, improper usage in the basement. And here we have something that occurred within an apartment,” FDNY chief James Leonard said during a press conference. “So the only common thread, of course, is the natural gas and the dangers of natural gas.”