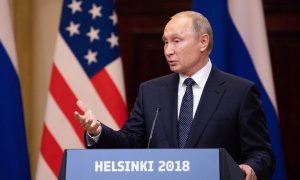 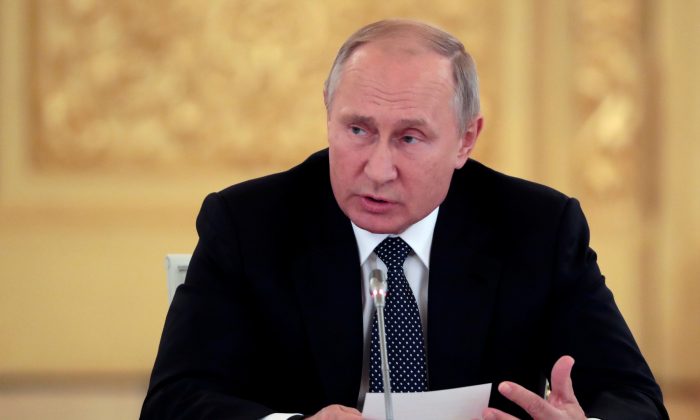 ‘Don’t Tell Anyone’: Putin Jokes About Russia Interfering in 2020 Election

During an appearance at an event in Moscow, Putin was asked by an NBC reporter about whether Russia was going to meddle in the upcoming U.S. election.

“I’ll tell you a secret: Yes, we’ll definitely do it,” Putin replied, according to CNN.

“Just don’t tell anyone,” he added.

“You know, we have enough of our own problems,” CNN quoted Putin as saying. “We are engaged in resolving internal problems and are primarily focused on this.”

In the same conference, Putin also said he never had a close relationship with President Donald Trump.

“In my opinion, we have good, businesslike relations, and a relatively stable level of trust,” Putin said, Bloomberg reported. “We’ve never been close, and aren’t now.”

Meanwhile, Putin said he wouldn’t mind if transcripts of phone calls between him and Trump were released after the White House released transcripts of a call between Trump and Ukrainian President Volodymyr Zelensky. Democrats seized on the phone call recently, alleging that Trump used his office to pressure his Ukrainian counterpart to investigate former Vice President Joe Biden and his son, Hunter.

“Any conversation can be published. I always proceed from that,” Putin said on Oct. 2, according to Bloomberg News.

“We don’t mind,” Putin added. “I assure you that there’s nothing there that would compromise President Trump.”

According to a Reuters report last week, Kremlin spokesman Dmitry Peskov stated that Russian officials would be prepared to discuss the matter with Washington if the phone calls need to be released.

Last year, Trump signed an executive order to impose automatic sanctions on foreign individuals, entities, and nations in retaliation for attempts to interfere in U.S. elections.

“Although there has been no evidence of a foreign power altering the outcome or vote tabulation in any United States election, foreign powers have historically sought to exploit America’s free and open political system,” Trump wrote in the order.

The order continued: “In recent years, the proliferation of digital devices and internet-based communications has created significant vulnerabilities and magnified the scope and intensity of the threat of foreign interference, as illustrated in the 2017 Intelligence Community Assessment.”

Director of National Intelligence Dan Coats said that Moscow isn’t the only one trying to interfere in the U.S. election, pointing to Iran, China, and North Korea.