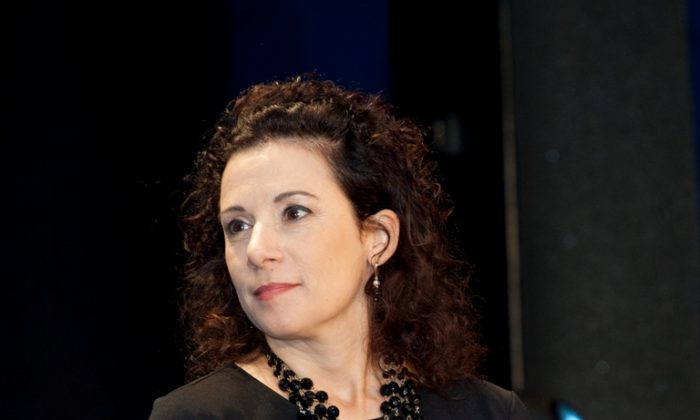 Madeline Di Nonno is executive director of the Geena Davis Institute and its programming arm, See Jane, which is working to change children’s entertainment and media. (Paula M. Gould Photography/Womenetics.com)
US

“Changing cultural perceptions of female worth and roles is necessary to bolster the number of women who lead,” stated Elisabeth Marchant, president and CEO of Womenetics, in a press release. “This initiative has a proven benefit to corporations and to the next generation of women who will launch careers and provide breakthrough innovations.”

Dr. Jean Kilbourne, an early proponent of media literacy, said images that sexualize girls and use female bodies to sell products damage society, are ubiquitous, and should be challenged.

Kilbourne, who co-authored “So Sexy So Soon: The New Sexualized Childhood and What Parents Can Do to Protect Their Kids,” said “Sexualization of girls leads to depression, eating disorders, and low self esteem.” Consumers should express their opinions to companies that use such images, and parents should talk to their children about them, to counteract the effect.

The way to change the toxic environment is not by complaining but by trying to help, according to Madeline Di Nonno, executive director of the Geena Davis Institute on Gender in Media.

Davis founded the institute after being shocked while watching TV with her daughter and seeing that almost none of the characters in children’s programs were female.

The institute has the largest body of research on gender images anyone has compiled, according to Di Nonno. The information lets television executives and film producers articulate the issue and measure changes. They can add tertiary female characters, make silent female roles speaking roles, and de-sexualize occupations, for example by changing a character from a beauty queen to a chemist.

“If girls don’t see girls, or the ones they see are hypersexualized and marginalized, what message are they getting?” asked Di Nonno. She said 17 percent of corporate board members are female, and 17 percent of characters in crowd scenes on TV and film are female. “Why are we stuck?” Di Nonno said.

Her group follows up with media leaders and asks them what they have done to represent female characters more realistically and more equitably.

Pat Mitchell, president and CEO of The Paley Center for Media, said female leadership creates a better and more prosperous environment for everyone, yet media images that belittle women can limit their confidence.

According to Mitchell, women should insist on joining corporate boards. “When women threatened to unsubscribe from Facebook until they put women on their board, they listened,” she said. Once on corporate boards, they can change corporate cultures to become more ethical, family-friendly, and profitable.

The chief executive said that women have an obligation and a gift to help each other. In the Congo, women who had lost everything created a healing and training community called The City of Joy. There they recovered from their grief and built skills used to help others.

“Give what you need to get,” said Mitchell. “It’s the golden rule, really. Now more than ever, words to live by.”

The theme of the 2013 Womenetics conference, held at the Georgia Aquarium, was Effective Leadership for the 21st Century Economy: Popular Culture and Positive Role Models for Women and Girls.

Forbes magazine named Marchant’s Womenetics media platform one of the Top 100 Websites for women for three years in a row.