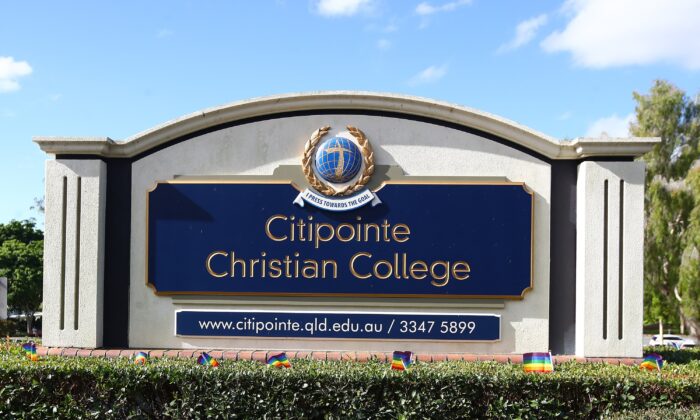 LGBTQI+ flags can be seen in a general view of Citipointe Christian College in Brisbane, Australia, on Jan. 31, 2022. (AAP Image/Jono Searle)
Australia

The Queensland (QLD) Education Minister has urged a Christian school to rescind its new enrolment contract which takes a traditional stance on gender and sexuality amid two probes into the student behavioural agreement.

Citipointe Christian College on Friday released its new faith-based contract which states the school would enrol students “on the basis of the gender that corresponds to their biological sex” and that sexual immorality, including homosexuality, bisexual acts, bestiality, incest and paedophilia, is “sinful.”

The College’s Principal has previously stated the school did not intend to “judge students based on their sexuality or gender identity” but rather to maintain its religious ethos as well as to give parents and students an opportunity to make an “informed choice” about whether to embrace its Christian education.

However, on Tuesday, QLD Education Minister Grace Grace wrote on her Facebook on Jan. 31 that “the ‘values’ laid out in this document don’t seem very Christian to me.”

She reiterated her stance on Tuesday, saying she found the religious statement in the contract “unacceptable” and “very distressing” as a parent of a non-binary child.

“In this day and age, to see this happening is actually quite unbelievable,” she said.

“We strive for an inclusive and supportive school environment—that is what we should be doing—and no student should be denied a world-class education because they are a member of the LGBTIQ+ community.”

Citipointe Christian College is also facing a possible review from the government’s non-state accreditation board and the Human Rights Commission over its contract as Grace revealed she has personally “raised the issue” with the Attorney General around anti-discrimination laws.

In response to the complaints about Citipointe College’s pacts, the Human Rights Commission said: “The Queensland Anti-Discrimination Act has not permitted religious schools to discriminate against currently enrolled students because of their sexuality or gender identity for 20 years.”

Meanwhile, the chair of a senior Anglican schools body on Tuesday issued a letter saying that they “invite and welcome all and hospitality is given to every student, no matter their race, gender, sexuality, ideology, ability/disability or religion.”

“The Anglican Church in its long history has come to value diversity as a positive good and our schools know the gifts that diversity brings to any community,” Bishop Jeremy Greaves of the Anglican Schools Commission wrote.

But conservatives including parents applauded the College’s decision as the Christian group Family Voice Australia encouraged people to sign a letter of support for the school for “standing up for Christian values.”

“They are a Christian school. They have a right to uphold the principles which the Bible, the bedrock of the Christian faith teaches,” a person wrote on Facebook. “If you don’t agree with their beliefs send your kids to another school. By the way, other faiths also believe the list mentioned in the article are sins.”

Citipointe College Principal and Pastor Brian Mulheran on Wednesday denied the accusation that the school was discriminating against LGBT+ students and stressed it was a matter of religious freedom.

“While I have been principal at the college, we have not expelled or refused to enrol any students on the basis that they are gay or transgender,” he said.

“As a college established for religious purposes, we have the freedom to maintain our Christian ethos and provide families with an education based on our shared beliefs.

“It is often misunderstood, but it is an established international principle that a legitimate exercise of religious freedom is not discrimination. It is a feature of an open society.”

The Epoch Times has contacted Education Minister Grace Grace’s office for comment but did not receive a reply at the time of publication.