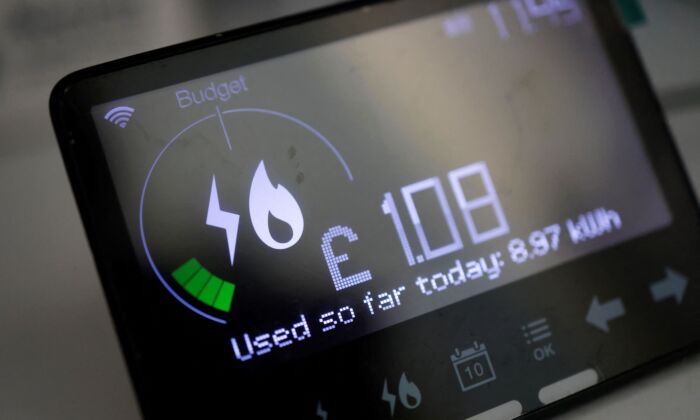 A smart energy meter, used to monitor gas and electricity use, is pictured in a home in Walthamstow, east London on Feb. 4, 2022. (Tolga Akmen/AFP via Getty Images)
UK

The Head of Public Policy at the Institute for Economic Affairs (IEA), Matthew Lesh, said it is “unlikely” the Don’t Pay energy bill boycott campaign will reach its target of 1 million pledges by Oct. 1.

So far more than 107,000 people in Britain have signed up, promising to cancel their energy bill direct debits at the start of October in protest at the soaring prices.

But Lesh told The Epoch Times: “The premise is that if 1 million sign up they will go on strike. But they only have six weeks to go and they have only got 107,000 pledges. There could be an increase in momentum. But it doesn’t seem likely they are on track to reach that target.”

He also questioned the commitment of the 107,000 who have signed up.

‘Ultimately They Are Going to Have to Pay’

He said people who did not pay their bills were also undermining their credit ratings and he said, “Ultimately they are going to have to pay anyway.”

Seventy charities and community organisations, including the Joseph Rowntree Foundation, signed an open letter to Conservative Party leadership candidates Liz Truss and Rishi Sunak on Sunday, urging them to do something about a shortfall of £1,600 facing families over the autumn and winter because of rising energy bills.

The letter concludes by saying: “You were both senior members of a government that pledged to ensure that the most vulnerable and least well off get the support they need. It is only right that this be your top priority should you take office.”

The new Conservative Party leader will be announced on Sept. 5 and will immediately take over as prime minister.

Truss has said she would introduce an emergency budget “within weeks” of taking office.

The Don’t Pay campaign says on its website: “We are demanding a reduction of energy bills to an affordable level. Our leverage is that we will gather a million people to pledge not to pay if the government goes ahead with another massive hike on October 1.”

It goes on to say: “Mass non-payment is not a new idea, it happened in the UK in the late 80s and 90s, when more than 17 million people refused to pay the poll tax – helping bring down the government and reversing its harshest measures.”

But Lesh said it was wrong to compare the Don’t Pay boycott with those who refused to pay the community charge—dubbed the poll tax—after it was introduced by former Prime Minister Margaret Thatcher’s government in 1989.

Consequences of a Boycott

Richard Lane, director of external affairs at Stepchange, has warned of the consequences of joining the energy bills boycott.

He told the Independent: “Any arrears will be added to the meter and a set amount will be deducted each week. This means you must pay the arrears at a set weekly amount or lose the supply. Your supplier can also remove the meter and cut off your supply, but fortunately this is incredibly rare.”

Lesh said the energy companies themselves were not making huge profits and, although the oil and gas companies were now very profitable, it came after a lean couple of years during the pandemic.

He added, “The fact that profits have gone up in the gas and oil industry is probably necessary if you want to encourage investment in new supplies.”

Lesh also pointed out that last year’s collapse of a number of smaller energy companies, like Bulb, had a knock-on effect.

“The failure of those companies cost £2.7 billion and we are all now paying that off. If Don’t Pay were successful it could lead to the failure of more energy companies and that would put extra costs on the rest of us,” he warned.

On Monday the Labour Party leader, Sir Keir Starmer, revealed his own plan—which he would implement if a snap general election was called and won by Labour—to freeze the energy price cap at £1,971 for six months from October, saving the average household £1,000, paid for by a windfall tax on oil and gas companies.

Starmer said: “We have a choice and this is really the political choice of the day. We either allow oil and gas companies to go on making huge profits which is what’s happening at the moment or we do something about it.”