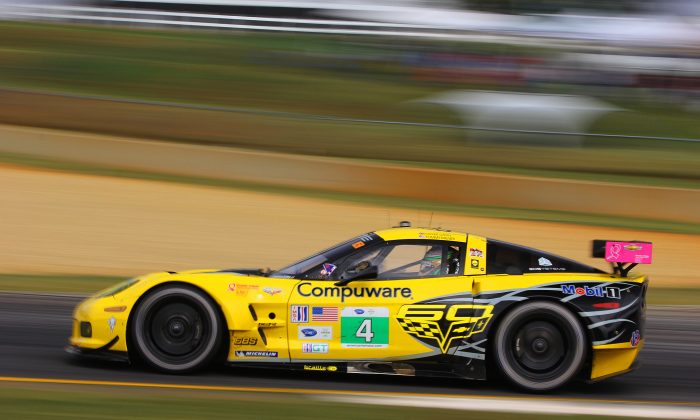 The #4 Corvette of Tom Milner and Olly Gavin steams out of Turn 10a headed to 10b during the afternoon session. (Chris Jasurek/Epoch Times)
Motorsports

BRASELTON, Ga.—An American racing tradition is ending. Petit Le Mans, which in 1998 was the first race of the then brand new American Le Mans Series, is running under ALMS sanction for the final time. Ever since 1999, this ten-hour, 1000-miles endurance classic at Road Atlanta has been on the schedule, usually as the season finale.

Petit Le Mans 2013 will be a race fans will brag about attending, a race they will talk about with their children. Anyone with any interest in racing should seize the chance to see the final running of this classic event.

There will be plenty to see: besides the cutting-edge prototypes and exotic GT machinery which competes in the American Le Mans Series, four other types of vehicles will be in action on track during the four-day event.

The ultra-competitive Mazda MX-5 series will race on Thursday and Friday. Cooper Prototype Lites, miniature versions of the bog ALMS prototypes, will also race those days, as will the Porsche GT3 Cup cars. Finally, the K&N stock car series will thrill fans with its big-bore V8-powered former Sprint Cup cars with a race on Friday afternoon.

Of course, the real draw is the ALMS. The HPD, Lola, and DeltaWing prototypes will be hitting 200 mph on the straight, and the tight competition between the Corvettes, Vipers, Porsches and Ferraris of the GTE class will keep fans on their feet for the whole of Saturday’s ten-hour race.

With all the practice and qualifying sessions, there will hardly be a minute when the track will be quiet from early Wednesday until Saturday night.

Not to be missed is Thursday’s night practice. The session starts at 7 p.m. and runs until 9, so the cars start at dusk and continue well into full dark. The sight of those loud, powerful cars snaking through the Esses, braking hard for Turns Six and Seven, and accelerating away down the back straight is worth the day’s admission—the three races and numerous practice and qualifying sessions are a bonus.

If 2013 were just another Petit Le Mans, it would be worth the trip to Road Atlanta. As the last race of an important era of American sports car racing, it is a must-see event.

Visit the Road Atlanta website to buy tickets and get more details about this historic weekend of racing.