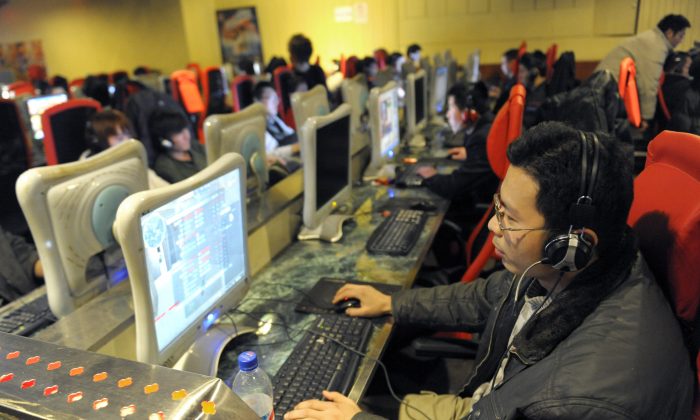 A young man plays an online game at a Internet cafe in Beijing on Feb. 27, 2010. (Liu Jin/AFP/Getty Images)
China

Don’t Like a News Story? Pay a Chinese Hacker to Get It Deleted

A novel business model involving government officials, policemen, website administrators, hackers, and thousands of middlemen was recently cracked down upon by Chinese authorities, leading to the dissolution of several gangs who engaged in the activity.

Clients—government officials, business executives, celebrities, anyone looking to rid themselves of unwanted publicity—would use middlemen to hire computer hackers to penetrate the network of a news website or popular Internet forum, and delete posts or news articles upon request.

A 6-month campaign run by the Chinese regime’s cyberspace authorities to root out the business has successfully concluded, the state-run Xinhua reported on Sept. 7.

Hackers were usually contacted by middlemen, who can profit handsomely from this private censoring operation. Sometimes the deletion work was done with the assistance of the website administrator, who would take a fee to abuse his position and delete posts upon request by the client.

The middlemen themselves are college students, professors, doctors, website editors, government officials and even police officers. The suspects revealed that they earned tens of millions of yuan every year, and that tens of thousands were active in this field.

A report in Party mouthpiece People’s Daily said that over 50 million yuan (about $8 million) had changed hands over the years, involving 2,000 people in 22 provinces. One suspect is a 26-year-old surnamed Yu who had only a high school diploma yet drove a Mercedes and lived in a mansion before authorities arrested him in May.

In four years, Yu, whose job was to delete offending posts, had 7.8 million yuan (about $1.2 million) in savings and enjoyed a luxurious residence in Hubei Province’s Qichun County. Yu commented that there were tens of thousands working in this industry.

The campaign by Chinese authorities led to the closure of almost 300 websites, over a million social media accounts being “dealt with,” and the discovery of over 9 million posts involved in the online extortion or paid deletions, according to Xinhua. More than 130 websites, including China Economic Net and China Youth Net, were investigated by cyberspace officials.

This February, Chen Ruigang, director of China Economic Net’s environmental channel, wrote negative reports about various companies and blackmailed them in exchange for removing the reports.

Incomplete statistics gleaned by the revealed that Chen had extorted almost $1 million from ten companies over a 3-year period, during which he worked at China Economic Net. According to Xinhua, Chen further menaced his victims by threatening to republish the articles on China Youth Net. Five persons including Chen were placed in criminal detention.

Suspects surnamed Zhao and Song were tried by a court in Sichuan Province late this April for extortion and fraud—they had threatened victims by setting up a website posing as a branch of the Communist Party’s anti-corruption agency. Written reports would supposedly be submitted to the Party authorities unless the victims paid up. And pay they did—over $300,000 found its way into the duo’s pockets by these illegal means.

Up until his discovery by Shenzhen authorities in May, suspect Yan posted negative reports he had collected on companies and individuals to his website. Discreetly leaving behind his contact information, he would negotiate with victims looking to delete the reports, changing them between dozens and hundreds of dollars. Xinhua reported that Yan had swindled $2,000 in “a short period of time.”

The next month, a web editor for the online service of Phoenix TV, a Hong Kong-based broadcaster, was sentenced to five years in prison for abusing his position. The suspect, surnamed Qiu, worked with a person called Lu in Hunan Province to post unfavorable articles and charge over a hundred dollars for each deletion. According to a judicial body in Beijing, almost $20,000 was extorted in 2012 and 2013.

Aside from cracking down on commercialized defamation and blackmail, the Chinese Communist Party’s internet security forces enforce draconian levels of censorship over China’s hundreds of millions of netizens.

Sensitive political and social terms are regularly blacklisted from search engines, and content containing independent commentary on these topics, from the truth of the 1989 demonstrations in Tiananmen to the recent questions raised over the deadly chemical explosions in Tianjin, are typically combed through and removed should they stray from the official explanation.

Such is the animosity with which the Communist Party regards freedom of expression that other keywords and phrases are not even acknowledged before being cast into the black hole of deletion. These include “Falun Gong,” a repressed spiritual movement widely popular in the 1990s before it was opportunistically deemed a political enemy of the Party, or “Tuidang,” a decade-old movement that has brought over 200 million Chinese to renounce their ties to communism and the Chinese regime.