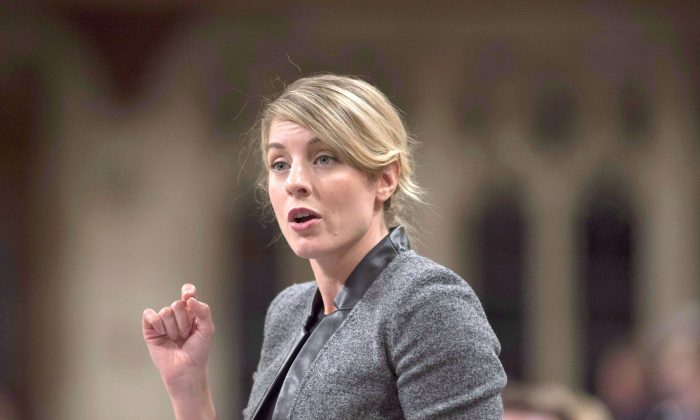 Minister of Canadian Heritage Melanie Joly during question period in the House of Commons on Feb. 16, 2017. (The Canadian Press/Justin Tang)
Canada

With Heritage Minister Melanie Joly investigating all possible scenarios on how best to support online Canadian content, a non-partisan organization is hoping the government will steer clear of imposing a new tax on Internet access.

Several groups representing content producers are pressuring the government to implement a so-called Internet tax as part of its investigation into how best to support CanCon in a digital age. Submissions to Joly’s national consultations closed last November, and her initial proposals are expected soon.

OpenMedia, which advocates for an open and affordable Internet, said in a press release that “Canadians already pay some of the highest prices in the industrialized world for Internet access,” and a tax to support CanCon would drive the cost even higher and particularly impact those in low-income communities.

A recent poll commissioned by OpenMedia found that, although Canadians are in favour of Canadian content, 70 percent oppose an Internet tax to pay for it.

David Christopher, communication manager at OpenMedia, said in an interview that there is broad public support for aiding Canadian writers and their content, but there has to be a better way than charging families above and beyond the already high Internet fees.

“An extra charge would drive the cost too high,” he said.

An Internet tax would force financially vulnerable families offline, Christopher said, meaning “hundreds of people would be denied [the opportunity] of getting online and creating their own content.”

According to Michael Geist, the Canada Research Chair in Internet and E-commerce Law at the University of Ottawa, a new Internet tax would cost Canadian consumers at least $500 million a year.

After a tax on Netflix was taken off the table in October 2016, the government began looking at other options, like charging federal and provincial sales taxes on foreign-based streaming services or surcharges on Internet services. Canadian streaming services, such as CraveTV, are already subject to HST.

During Joly’s national consultations, groups such as ACTRA, the Writers Guild of Canada, the Directors Guild of Canada, and the Canadian Media Producers Association made the case for new fees or taxes on Internet services, Internet providers, and Internet advertisers, as well as on the sale of items like hard drives and USB flash drives.

OpenMedia’s submission said an Internet tax would bring “digital access down rather than lifting Canadian cultural production up.”

Reynolds Mastin, CEO of the Canadian Media Producers Association, said what’s important for his group is having the “right mechanism” in place. Because more and more Canadians are consuming content online, the framework of how the independent producers receive their contributions needs to be modernized, he said.

The independent producers, which are members of the CMPA, receive funding from a variety of different outlets, such as broadcast licensing fees, distributors, and the federal government. The issue is that the required contributions by cable providers—who provide both cable and broadband services—are getting lower as more people cancel their cable services and watch movies or TV shows online.

Mastin said the association is trying to put a mechanism in place that would maintain the level of investment needed, which in due time would be more important than finding a quick fix to the situation.

He said charging an Internet tax would not be right given that Internet rates are already expensive; it would force more people offline and would be counterproductive for the CMPA.

“We want [Canadians] to see their own content, read their stories, and see their talent reflected back on the screen,” he said.

Jen Hardy is a freelance journalist located near Niagara Falls. Since graduating from Niagara College in 2015 she has been freelancing for various local publications.