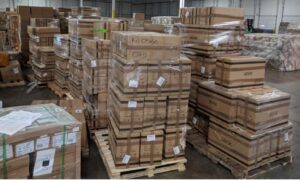 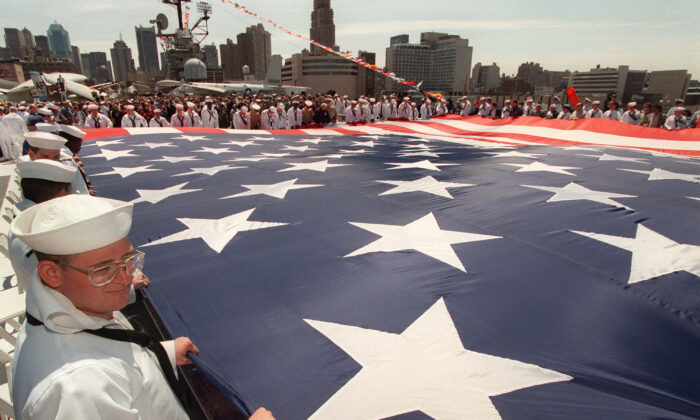 A U.S. war veterans and active duty personnel join others in rolling up a fifty by ninety-foot U.S. flag on the deck of the Intrepid Sea Air Space Museum in New York, during a Memorial Day ceremony, on May 26, 1997. (Stan Honda/AFP via Getty Images)
Viewpoints

When we get to Memorial Day each year, I always think about my father, who was a career Army officer, and my mother, who as an Army wife and went wherever he went.

My dad went into World War II as an enlisted soldier and afterward went to Gettysburg College through the GI bill. In school he joined the Reserve Officers’ Training Corps, or ROTC, and found that serving in the uniform was so rewarding psychologically that he spent 27 years in the infantry.

At times like when my dad was in Korea or Vietnam, my mom stayed home taking care of the kids and tried to balance the family checkbook because he was gone. And gone back in those days really meant gone—no email or Zoom or any of the modern capacities to communicate.

So, I grew up surrounded by a really deep sense of service.

I gained a real sense that the American project—our revolutionary experiment in self-governance—doesn’t just happen. It’s not a law of nature. In fact, if anything, the opposite is true: History shows our free society is an aberration that can disappear at any time.

The American system can only endure and prosper with the sacrifices of so many brave men and women, the vast majority of whom will never be known to the public. And on Memorial Day, we honor those who gave the ultimate sacrifice so you and I can live our lives how we want to.

One of the things that’s so remarkable about the American military is its aptitude to grow our noncommissioned officers. Indeed, they perform functions that in the old Soviet army would be performed by majors and lieutenant colonels. No one else can really compare except maybe the Israelis. This unique ability gives us an unparalleled advantage in combat that we should remember on Memorial Day. All the way down the chain of command, every soldier plays a role in our survival.

This week on my podcast “Newt’s World,” in honor of Memorial Day and the sacrifices of so many of our finest men and women, I wanted to invite back Pete Hegseth, who served in the Army National Guard for two decades, until last month. He is also the author of “American Crusade: Our Fight to Stay Free” and a “Fox and Friends Weekend” co-host. We share stories about our nation’s warriors and discuss the real meaning of Memorial Day.

Back in 1868, John A. Logan, the commander in chief of the Grand Army of the Republic, designated one day in May each year for the following purpose:

strewing with flowers or otherwise decorating the graves of comrades who died in defense of their country during the late rebellion, and whose bodies now lie in almost every city, village, and hamlet churchyard in the land

Memorial Day was born. It wasn’t about barbeques, as great as they are. It was about those who gave their lives for this country.