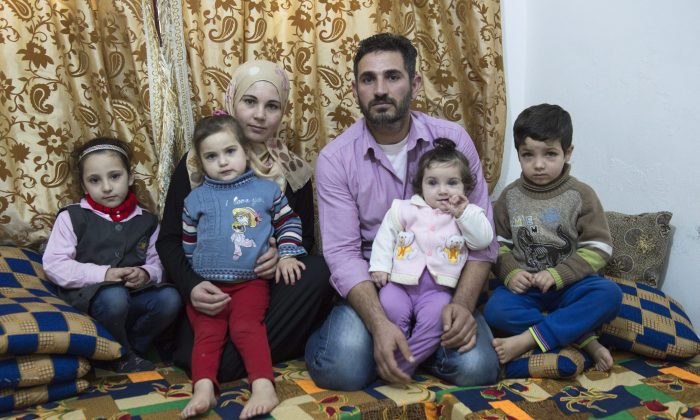 Syrian Refugee Samer Albqerat with his wife Doaa and their children on Dec. 1, 2015, in Irbid, Jordan. The family is waiting for approval to immigrate to Canada. (The Canadian Press/Paul Chiasson)
Canada

AMMAN, Jordan—Khaled Dos says he understands why Canada is focusing on families as it chooses thousands of potential new citizens from among the millions of Syrian refugees desperate for a fresh start.

It’s hardest for those with young children to find safety, either in Syria or in one of the countries they now live, the 25-year-old single man says through a translator.

“But surely, Canada could just set aside a few spots—just a few—for someone like me?”

Dos fled Syria in 2012 to avoid getting conscripted into the military. He’d managed to stay out by being in school, but Syrian President Basar Assad’s forces were cutting up the papers of young men just like him and dragging them off to war.

Now he lives in Jordan, unable to get back to school because he can’t afford it, competing with thousands of other young Syrian men for the underground jobs they can get, and using social media to raise awareness of his country’s struggles.

No one helps people in his situation, he says. Aid money goes to help young children, scholarships to those with connections. Yet, it’s young men who are the future leaders of the country.

“I have ambition. I have hope for a different future,” he says.

As a registered UN refugee, he theoretically has a chance of finding a new home in one of the countries that resettles refugees.

But the Liberal government’s decision to focus on resettling women, children, and families places him all the way at the bottom of their list, a position entrenched after last month’s deadly terrorist attacks in Paris.

While no link between the attackers and the flow of Syrian refugees across Europe has been proven, early suspicion and persistent fear resulted in pressure on the Liberals to make their criteria more stringent to minimize risk.

‘A Change of Culture’

If Canada is worried about terrorists, they should go after Assad instead of over-analyzing the refugees trying to escape his regime, says Abdelhakim Ali Mahmoud.

Mahmoud, 44, has five sons and a daughter. The eldest, Yousef, has a hole in his heart and has been reaching out to countries around the world for years looking for someone who might take them in so he can get the treatment he needs.

The family is currently waiting to see if Canada is that place.

Perhaps an influx of Syrians into the West is what’s needed, he says through a translator.

“A change of culture and mentality may be something for both sides to get to know each other. And if in the end we will know each other, it will be better.”

Samer Albqerat, 31, says one of the reasons he hopes to get to Canada is that he’s heard Muslims are more welcome there than in the U.S.

“They look at Islam and all they think about is terrorism,” he says through a translator. “It is not like that at all.”

He says he believes Canada is a place where freedom of religion is widely accepted; he’s heard nothing of the recent Canadian debate about the wearing of the niqab, nor a recent series of attacks against Muslim women.

His wife, 25-year-old Doaa, wears the hijab and isn’t worried at all about staying true to her culture upon arrival in Canada, if her family is selected. Their file is in front of Canada’s screening team for possible admission.

She’s more afraid of being alone. “Here, I am used to my family, my friends, there are people to talk to,” she says.

All refugees are being screened as the Liberals get through their pledge of resettling 25,000 people by the end of February, taking biometric information and asking about military service and other potential red flags.

Some people have been turned back, but none due to security concerns, immigration officials said Dec. 3.

When asked whether Canadians had any real reason to worry, Bruno Saccomani, Canada’s ambassador to Jordan, paused.

“I mean, the two attacks we had last year were homegrown,” he said, referring to the October 2014 incidents linked to radicalized men in Ontario and Quebec.

“As a Canadian, compared to many parts of the world, I would say no … I think what you’re seeing here is the establishment of best practices of how we’re going to be doing this going forward.”