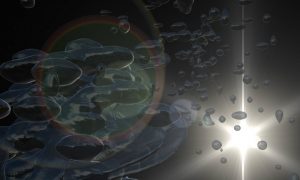 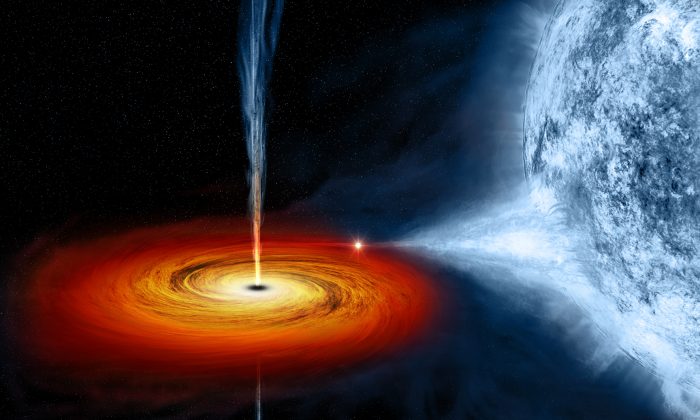 In the movie Interstellar, the main character Cooper escapes from a black hole in time to see his daughter Murph in her final days. Some have argued that the movie is so scientific that it should be taught in schools. In reality, many scientists believe that anything sent into a black hole would probably be destroyed. But a new study suggests that this might not be the case after all.

Forty years ago, Stephen Hawking shocked the scientific establishment with his discovery that black holes aren’t really black. Classical physics implies that anything falling through the horizon of a black hole can never escape. But Hawking showed that black holes continually emit radiation once quantum effects are taken into account. Unfortunately, for typical astrophysical black holes, the temperature of this radiation is far lower than that of the cosmic microwave background, meaning detecting them is beyond current technology.

Hawking’s calculations are perplexing. If a black hole continually emits radiation, it will continually lose mass—eventually evaporating. Hawking realized that this implied a paradox: if a black hole can evaporate, the information about it will be lost forever. This means that even if we could measure the radiation from a black hole we could never figure out how it was originally formed. This violates an important rule of quantum mechanics that states information cannot be lost or created.

Another way to look at this is that Hawking radiation poses a problem with determinism for black holes. Determinism implies that the state of the universe at any given time is uniquely determined from its state at any other time. This is how we can trace its evolution both astronomically and mathematically though quantum mechanics.

This means that the loss of determinism would have to arise from reconciling quantum mechanics with Einstein’s theory of gravity—a notoriously hard problem and ultimate goal for many physicists. Black hole physics provides a test for any potential quantum gravity theory. Whatever your theory is, it must explain what happens to the information recording a black hole’s history.

It took two decades for scientists to come up with a solution. They suggested that the information stored in a black hole is proportional to its surface area (in two dimensions) rather than its volume (in three dimensions). This could be explained by quantum gravity, where the three dimensions of space could be reconstructed from a two-dimensional world without gravity—much like a hologram. Shortly afterwards, string theory, the most studied theory of quantum gravity, was shown to be holographic in this way.

Did a Black Hole Give Birth to the Universe? What Came Before the Big Bang?

From Black Holes to Dark Matter, an Astrophysicist Explains

Using holography we can describe the evaporation of the black hole in the two-dimensional world without gravity, for which the usual rules of quantum mechanics apply. This process is deterministic, with small imperfections in the radiation encoding the history of the black hole. So holography tells us that information is not lost in black holes, but tracking down the flaw in Hawking’s original arguments has been surprisingly hard.

But exactly what the black holes described by quantum theory look like is harder to work out. In 2003, Samir Mathur proposed that black holes are in fact fuzzballs, in which there is no sharp horizon. Quantum fluctuations around the horizon region records the information about the hole’s history and thus Mathur’s proposal resolves the information loss paradox. However, the idea has been criticized since it implies that somebody falling into a fuzzball has a very different experience to somebody falling into a black hole descried by Einstein’s theory of general relativity.

The general relativity description of black holes suggests that once you go past the event horizon, the surface of a black hole, you can go deeper and deeper. As you do, space and time become warped until they reach a point called the “singularity” at which point the laws of physics cease to exist (Although in reality, you would die pretty early on in this journey as you are pulled apart by intense tidal forces).

In Mathur’s universe, however, there is nothing beyond the fuzzy event horizon. Currently, a rival theory in quantum gravity is that anybody falling into a black hole hits a “firewall” and is immediately destroyed. The firewall proposal has been criticized since (like fuzzballs) firewalls have drastically different behavior at the horizon than general relativity black holes.

But Mathur argues that to an outside observer, somebody falling into a fuzzball looks almost the same as somebody falling into an Einstein black hole, even though those falling in have very different experiences. Others working on firewalls and fuzzballs may well feel that these arguments rely on properties of the example he used. Mathur used an explicit description of a very special kind of fuzzball to make his arguments. Such special fuzzballs are probably very different to the fuzzballs needed to describe realistic astrophysical black holes.

The debate about what actually happens when one falls into a black hole will probably continue for some time to come. The key question to understand is not that the horizon region is reconstructed as a hologram—but exactly how this happens.

Marika Taylor is a professor of theoretical physics at the University of Southampton. This article was originally published on The Conversation. Read the original article.