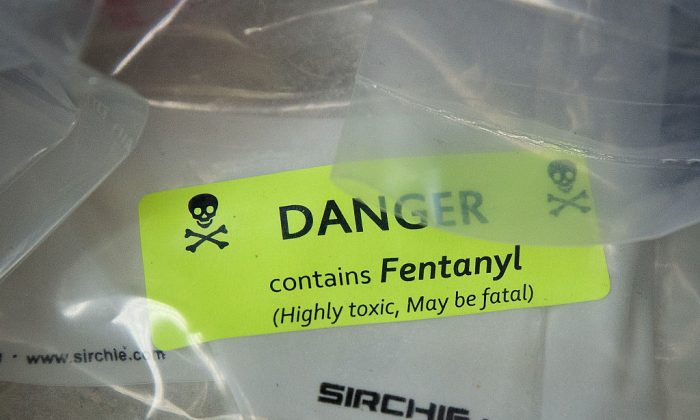 Bags of heroin, some laced with fentanyl, are displayed before a press conference at the office of the New York Attorney General, in New York, on Sept. 23, 2016. (Drew Angerer/Getty Images)
Viewpoints

We know that radical left-wing subversives want to legalize hard drugs. So do some libertarians—which is a polite word for social Darwinism. But conservatives generally oppose legalization, understanding the devastating social costs and personal dissipation that hard drug abuse causes to families, communities, and individuals who would be tempted to imbibe by the lack of potential legal consequence.

Until now, that is. An increasing number of supposedly conservative organizations have fallen for the notion that criminalizing drug possession causes more harm than good. These conservatives are now pitching other conservatives to disengage in the war on drugs in the name of “harm reduction.”

One such organization is “End It for Good,” which self-describes as founded by a “conservative Christian wishing to replace criminalization” with as the site puts it, a program to “reduce harm from drugs and help more people thrive.” How? One article on the group’s website sighs, “Imagine churches and community organizations throughout the state offering their facilities and a few volunteers to host a weekly telehealth counseling session for those in their local community.”

I’m sorry, but how naïve can you be? We are talking about hard drug addiction! Such pie-in-the-sky feel-goodism of a world in which well-meaning counselors oozing empathy and praying with substance abusers in church basements or over Zoom streams is no match for the cruel physical and psychological realities of the drug-abusing life.

Indeed, we already tried that kind of soft approach with mental illness. Years ago, many of our mental hospitals were closed because they were seen as unduly restrictive of personal freedom. The ability to institutionalize mentally ill people was greatly curtailed. The supposedly punitive prior approach was supposed to be replaced with friendly local mental health centers that would help people in need of care in their own communities without the stigma of hospitalization.

Nice idea. But the community resource centers were often not built. Local support services never sufficiently materialized. All these years later, there simply are not enough programs to treat the number of mentally ill people who need help. Consequently, un- or under-treated mental illness—along with addiction—have become prime causes of our homeless crisis.

The same deleterious consequences will flow from the harm reduction approach to hard drugs. Legalizing scourges like heroin, fentanyl, meth, cocaine, crack, and oxycodone will axiomatically lead to more people taking these life-destroying substances. And it will communicate to addicts and those tempted to inject, snort, or swallow these cruel life destroyers that using is respectable and acceptable.

Legalization will also increase availability and reduce prices, exacerbating our conjoined crises of mental illness, homelessness, and overdose deaths. On a macro level, it will lead inexorably to what I call the “4-Ds”: dissipation, dysfunction, decadence, and decline.

That isn’t just supposition. We already have real-life models of what hard drug legalization would look like in the United States. Witness San Francisco, Seattle, and Los Angeles, where district attorneys have refused to prosecute drug violations. The outcome? A precipitous decline in quality of life, a steep increase in street squalor—with human feces on the streets in some places—and a spike in property and violent crime. Because the laws are ignored—hence, drug use is quasi-legalized—large swaths of these once world-class cities have become fetid cesspools—even as the cost of living in these cities has sky-rocketed. What a mess.

Societal deterioration is infectious. Follow the same policies across the country, and we will derive the same results.

We are already seeing hints of that with the great marijuana legalization experiment. I’m not talking about medical marijuana—which has legitimate purposes just as opioids do to control pain when properly prescribed. But because weed has become more potent, legalized recreational marijuana is adversely impacting our youth and the quality of lives in the communities where it’s permitted.

For example, studies have shown that marijuana users have a greater likelihood of suicidal ideation. It can cause hallucinations and a gastrointestinal malady known as cannabinoid hyperemesis syndrome, the symptoms of which include heavy and repeated uncontrollable vomiting. A study published last year in JAMA Psychiatry reported evidence that a “component cause of schizophrenia” may involve heavy use of marijuana. Indeed, according to the report 8 percent of schizophrenia diagnoses in Denmark “may be attributable to cannabis use disorder.”

That’s not all. “College age marijuana use increased 18 percent and is 48 percent higher than the national average, currently ranked 6th in the nation.” And get this: “The yearly number of emergency department visits related to marijuana increased 54 percent after the legalization of recreational marijuana (2013 compared to 2017),” with the yearly number of marijuana-related hospitalizations increasing 101 percent over the same time period.

If it’s that bad with marijuana, imagine how much worse it would be if we swept away legal penalties for the abuse of harder, more dangerous drugs. The inevitable outcome would be more addiction, increased deaths, and destroyed families.

This certainly doesn’t mean that jail should be the primary societal response to drug abuse. It shouldn’t even be the first approach when the crime is simple use or possession. But helping people avoid hard drugs—and inducing them to get clean—requires continued illegality, if only as a means of inducing abusers to seek help. In other words, reducing and preventing addiction often requires a stick as well as a carrot.

So, by all means, let’s increase the availability of rehabilitation services. Let’s reach out in compassion to our neighbors and families struggling with substance abuse. And allow those arrested for drug possession the first, second, or even third times to opt into a structured rehab program instead of incarceration or other punishment that can culminate with all charges dropped once the accused successfully completes the program.

But don’t drop the potential for criminal penalties. Don’t eradicate that option for providing needed social structure and coercive inducement to quit abusing. Because if we follow the End It For Good-recommended approach, we may have fewer incarcerations, but at the cost of more addicts, increased crime, worse homelessness, and exacerbated mental illness, all without the concomitant commitment of society to devote the necessary resources required to help people stay clean.