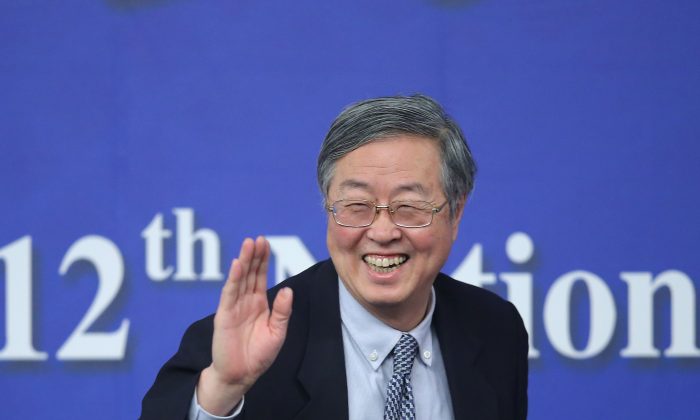 Zhou Xiaochuan, governor of the People's Bank of China, at a press conference at the National People's Congress in Beijing, China, March 12, 2015 ( Feng Li/Getty Images)
News

That changed after the Western system almost crashed in 2008. Central bankers—all bankers really—are viewed with much more suspicion.

Not in China, though, where the central bank along with the central regime avoided a deep recession in 2008–2009 and kept the country growing officially at around 7 percent.

Now that more than a few problems have emerged in the Chinese miracle economy, more than a few people are looking to the central bank to fix a slowdown in growth, the burst real estate and stock market bubbles, and the growing inability of companies and local governments to pay back their debts.

So before the end of the year, the People’s Bank of China (PBOC) reassured investors and its own citizens that it will be able to handle the problem.

According to a monetary theorem called “impossible trinity,” even China’s superstar central bankers cannot have their cake and eat it too.

“China will maintain a prudent monetary policy with more flexibility,” state-run Xinhua reported. “The PBOC will flexibly use a wide combination of monetary tools to keep moderate liquidity in the market and help realize a reasonable growth of money supply and social financing.”

It also wants to liberalize interest rates and keep the exchange rate stable. All in all, the more flexible monetary policy is supposed to help structural reforms in the next coming years, like freeing the international movement of capital.

Putting aside the big question mark of whether PBOC policy was prudent to this date or not—it wasn’t—let’s focus on whether the central bank actually has the tools to deliver on its three objectives named above:

According to a monetary theorem called “impossible trinity,” even China’s superstar central bankers cannot have their cake and eat it too.

So far, only the Communist Party’s addiction to stability has gotten in the way.

As long as capital is flowing out of the country, there is pressure on the exchange rate, and it would go down if left to its own devices.

The central bank can remedy that problem by selling foreign exchange reserves, which it has been doing for more than a year, to artificially boost the price of the yuan.

This process, however, shrinks the balance sheet of the central bank, thereby reducing liquidity in the domestic economy. But the PBOC doesn’t want to reduce liquidity, especially if the economy is slowing down.

So it needs to increase the domestic money supply to make up for the shortfall it creates by selling foreign exchange reserves.

Printing more yuan while the number of dollars remains the same means the price of the yuan has to drop versus the dollar, so the vicious cycle continues.

So far, China has tried to control the capital outflows by keeping the capital account shut, but even that hasn’t worked really.

So in the near future, China’s central bankers have to decide whether they want to have their cake or eat it. Structural reform and an open capital account, and liquidity in the domestic market as well as a stable exchange rate just aren’t all possible at the same time.

So if China really wants to reform and open up its capital account, it will have to let go of keeping a stable exchange rate so it can control domestic monetary policy.

In the past, China has kept the exchange rate stable to favor exporters and also accumulate foreign exchange reserves.

Since that now doesn’t accumulate more reserves, and since the exchange rate would actually drop if left alone, it only has to gain by moving toward what Western countries have already: a floating exchange rate, control over domestic monetary policy, and a free capital account.

So far, only the Communist Party’s addiction to stability has gotten in the way of this. So maybe a bit more flexible monetary policy courtesy of the PBOC won’t hurt this time.