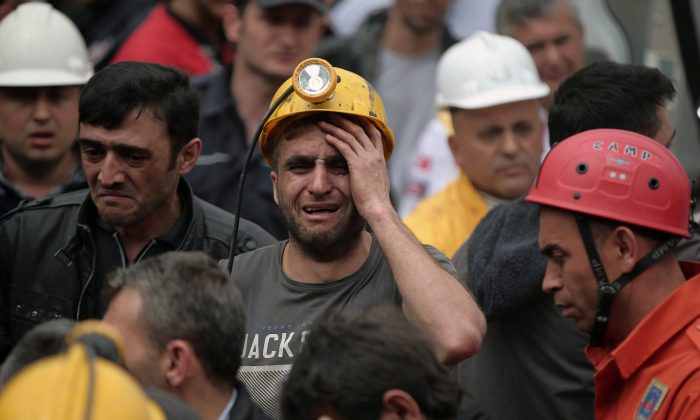 A miner cries as rescue workers carry the dead body of a miner from the mine in Soma, western Turkey, Wednesday, May 14, 2014. An explosion and fire at the coal mine killed at least 232 workers, authorities said, in one of the worst mining disasters in Turkish history. Turkey's Energy Minister Taner Yildiz said 787 people were inside the coal mine at the time of the accident. (AP Photo/Emrah Gurel)
Opinion

Soma, a little mining village in western Turkey, became host to one of the greatest industrial crimes in mining history when an explosion trapped 800 miners 2km underground and 4km from the exit. At the time of writing, the death toll has already exceeded 280, and it may yet exceed 400.

Turkey is mourning lost lives, quite rightly, but many are also feeling anger towards a system that squeezes out profits at the expense of workers’ safety.

The country has one of the world’s worst safety records, in mining and across all sectors. More than 11,000 Turks have died in workplace incidents in the last decade, and the International Labour Organisation ranked the country third worst in the world for worker deaths in 2012. In mining, a 2010 report by the Ankara-based think-tank TEPAV reveals that 7.2 workers died per million tonnes of coal mined in Turkey, in comparison to 1.27 deaths in China, and just 0.04 in USA.

This isn’t simply misfortune: what lies behind these tragic events is the unregulated and poorly supervised attempts of a corrupt ruling government to enact hasty privatizations and force people into more informal work.

The Soma mine itself was privatised in 2005. In the heyday of an anti-public sector campaign, the new owners of the plant had proudly declared that production costs had declined from around US$120-130 per tonne under public ownership to just US$23.8 per tonne.

Impressive numbers, sure, but what actually facilitated this “miraculous market success” was the determined evasion of the security measures and safety standards. When asked what had changed at the mine, Soma’s CEO, Alp Gürkan, said: “The answer is ‘nothing’. We simply introduced methods of the private sector.”

While these “methods of the private sector” were introduced, average daily pay for the miners hovered at 47TL (around US$20) and production tunnels were extended from 350 meters to more than 2.5 kilometres, increasing the danger for workers.

Mines in Turkey now have minimal oversight. The Council of Public Inspection was dissolved by a government decree in 2011, a move that reduced the role of formal inspections to no more than friendly visits of the company headquarters, with no attention paid to the actual working conditions within the tunnels.

The safety implications of privatization are clear. The TEPAV report found 4.41 worker deaths per million tonnes in Turkey’s publicly-owned plants, compared to the private sector average of 11.50 deaths. Workers in a privately owned mine in Turkey appear to be ten times more likely to die on the job than their Chinese counterparts.

People are increasingly recognising this tragedy cannot be written off as a “working accident”. Workers in Turkey have called a one-day strike, and miners across the world have sent messages of solidarity.

The contrast with the half-hearted and tone-deaf speech by the prime minister, Recep Tayyip Erdoğan, is clear. Erdoğan compared the tragedy to mining accidents in England and US in the late 19th century, arguing that “explosions like this in these mines happen all the time”. His words have sparked a wave of protests all around the country.

Yet, amid all this justified local anger one should not miss the global aspects of the Soma crimes. For what lies behind this “market does everything better” approach is the ongoing process of uneven globalisation, where indigenous peoples across the globe are used for corporate profits.

The tragedy in Soma is a clear manifestation of “peripheral capitalism” at its best – or at its worst – as the most polluting and hazardous industries are shipped to global sweat-shops with poor regulation and fragmented, informal working conditions.

Erinç Yeldan does not work for, consult to, own shares in or receive funding from any company or organisation that would benefit from this article, and has no relevant affiliations. This article was originally published on The Conversation. Read the original article.