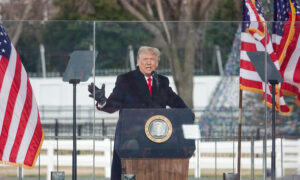 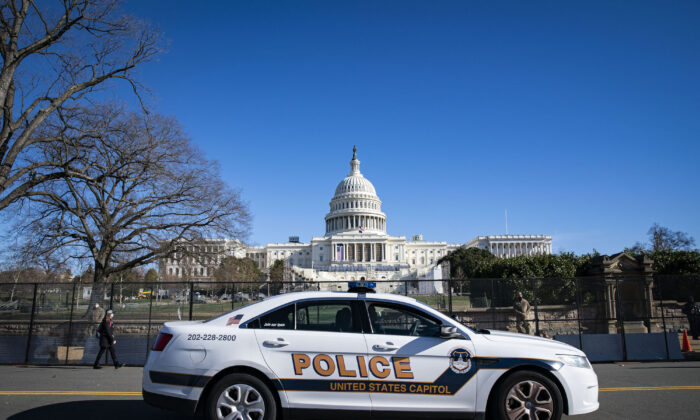 A U.S. Capitol Police car drives past on patrol in front of security fencing near the West Front of the U.S. Capitol in Washington, on Jan. 9, 2021. (Al Drago/Getty Images)
US News

“This morning we are working with our federal, state, and local partners on a routine training exercise on the grounds of the U.S. Capitol. Please do not be alarmed if you see emergency vehicles and low flying helicopters,” the agency said. It’s not clear if the exercise is designed to prevent a breach like the Jan. 6 Capitol incident.

EXERCISE: This morning we are working with our federal, state, and local partners on a routine training exercise on the grounds of the U.S. Capitol.

Please do not be alarmed if you see emergency vehicles and low flying helicopters. pic.twitter.com/bOaqUXJudn

Authorities told Fox News that the exercise was carried out by state, federal, and local agencies at around 8:30 a.m. on Monday. It was described as routine.

No additional information was released.

Witnesses to the exercise said that on Monday morning, they saw “military-style helicopters” landing on the Capitol lawn before taking off moments later.

The Department of Justice (DOJ) has arrested and charged about 440 individuals in connection to incidents on Jan. 6, according to the U.S. Attorney’s Office for the District of Columbia. More than 100 were charged with allegedly assaulting or impeding law enforcement.

Last month, the Department of Defense declined to continue the National Guard’s deployment around Capitol Hill and Washington. After Jan. 6, there were several thousand Guard members and security fencing placed around the Capitol.

Months after the breach, a man smashed his car into a Capitol Police barricade near the Senate building, killing one Capitol officer and injuring another. The suspect, Noah Green, was later identified as a supporter of the Nation of Islam, although the group denounced Green and said he wasn’t affiliated with them.

“The suspect rammed his car into two of our officers and then hit the north barricade barrier,” Acting Capitol Police Chief Yoganana Pittman said in April. “At such time the suspect exited the vehicle with a knife in hand. Our officers then engaged that suspect. He did not respond to verbal commands.”