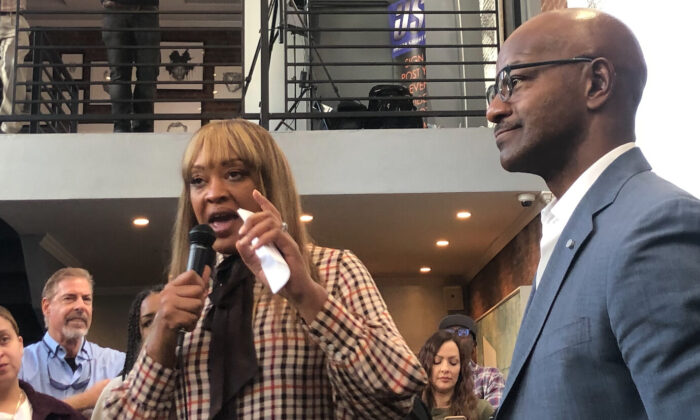 ‘Don’t Allow Them to Enslave Us’: Black Americans Protest Against Vaccine Mandates in NYC

According to recent NYC.gov data, blacks are the least vaccinated ethnic group, with 40 percent of them considered fully vaccinated.

The meeting was vibrant, vociferous, and often involved talk of rallying spiritual power.

It was hosted and organized by Angela Stanton King, founder of the American King Foundation, and Kevin Jenkins, CEO of Urban Global Health Alliance.

“Black Americans all across America are waking up! They realize modern-day slavery is upon them again,” Jenkins told The Epoch Times.

“In black communities, they are starting to have serious dialogue and are strategizing on how to fight back! They are saying no to the vaccine/slave passport and no to segregation. We have a long, dark history with bigotry and exploitation, and we are asking the world to stand with us! It’s time to fight back!”

Kwame Brown spoke during the gathering via videoconference, advocating for freedom of choice. He is the first high school basketball player in NBA history to be drafted in the first overall pick.

“Our community needs to remember that they told women it was ‘their body, their choice,’ when it came to abortion, and really realize what that means—that they don’t care about your body or your kids,” Brown told The Epoch Times.

“Stay strong and fight for your freedom of choice in a peaceful way,” he added.

Among the speakers were two doctors, Stella Immanuel and Carrie Madej, who both talked about vaccine and COVID-related information that they said was largely suppressed by mainstream media and big tech platforms.

Attorney Tricia Lindsay, another featured speaker at the meeting, told attendees, “[They] shut the churches down to force people … to get indoctrinated into a whole new religion.”

Amid constant thunderous cheers and applause, she maintained that the media has pushed fear and hysteria over the virus and encouraged people to “put more faith in a vaccine” than in their God.

She said that the “elites” are pitching people against each other with “dog whistle” terms, which has seen family members stop interacting over disagreements about the vaccine. She called it a “demonic situation.”

“Think! Think! Don’t just roll over and take everything that they tell us,” Lindsay said.

“You tell me that you’re going to take away my education, my livelihood, food, travel, all the basic fundamental rights, if I don’t subject myself to your tyranny, to your poison? There is no consent; we have to hold the line.

She differentiated between God and religion, and told the people present that they should leave the churches that have been hijacked by untruthful people.

Lindsay was an educator for 24 years in both administrative and teaching positions.

“Trust me, the school system went to hell a long time ago,” she asserted.

“Vaccinated or unvaccinated, together we stand, united!”