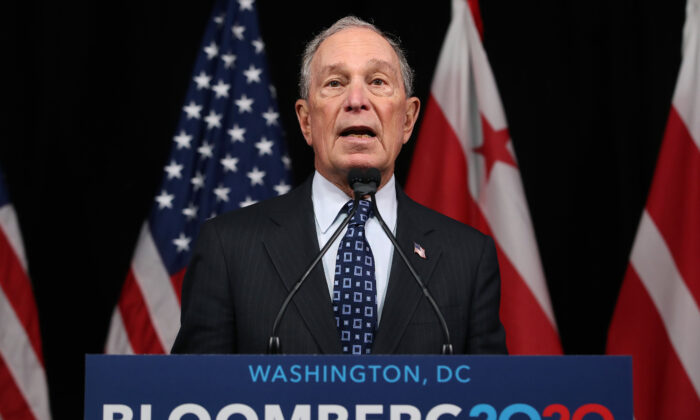 Donors Are a Lousy Way to Gauge Political Support

To get onstage at the last Democratic debate, a candidate had to have received contributions from at least 225,000 donors. That disqualified Mike Bloomberg. He has only one donor: himself.

That rule sounded nice and democratic with a small “d,” but actually, it is a highly flawed way to measure a candidate’s ability to win a national election. The Democratic National Committee has wisely just removed that requirement from the next debate, scheduled for Feb. 19 in Nevada.

This will almost certainly give Bloomberg a place at the podium in Las Vegas. All he has to do is reach 10 percent in four national polls, and he’s almost there.

Some believe this change was made to help Bloomberg. They may be right. But there was something odd about keeping a Democrat who is obviously a top contender off the debate stage. Recent polls show Bloomberg—along with Joe Biden—best able among Democrats to defeat President Donald Trump.

It’s time to stop dismissing Bloomberg as nothing more than a gazillionaire trying to buy the election. He was a three-term mayor of New York City. That’s a bigger and harder job than any of the other candidates ever held. The borough of Brooklyn alone has four times the population of Bernie Sanders’ state of Vermont. And the differences between New York’s and Vermont’s ethnic, racial, religious and economic diversity can hardly be compared.

Money is money. If buying the election is the concern, then the sums spent should matter more than where funds came from. That would also apply to Sanders. He dropped an astounding $50 million in the last three months of 2019 on his campaign—at least $15 million more than Biden, Elizabeth Warren and Pete Buttigieg each spent.

Sanders and Warren boast that they take money only from small donors. That seems more democratic but mainly on the surface. Their claims are partly false. Both campaigns have tapped millions obtained from deeper pockets.

The argument that politicians relying on small donations can’t be bought by moneyed interests goes only so far. You could say the same of a multibillionaire who isn’t taking money from anybody.

Even less valid is the case that legions of small donors reflect electability. Sanders has a core of passionate supporters who have contributed nearly $60 million in donations less than $200 in the 2020 cycle. But passion does not necessarily win elections. Votes do. How come Biden, whose fundraising has been pathetic, still does better than Sanders in most national polls—among Democratic voters as well as the general electorate?

Like Sanders, Trump has a cultlike following and has amassed his own mountain of small checks. According to OpenSecrets, in the 2020 cycle, he has raised over $44 million from small donors. Warren raised slightly less.

But now the question must be asked: What about voters who don’t give money to any candidates? If you’re poor, you may have higher priorities for that $25 than a politician’s campaign.

And if you have two jobs and three kids running around, you’re probably not online on political websites hours a day. You’re not at rallies. And if you’re not engaged that way, you probably aren’t being solicited for campaign contributions. But there’s a good chance that you will vote.

Yes, Americans should address the role of big money in their politics. But now is not the time for the Democratic Party to unilaterally disarm. We don’t know how Bloomberg will fare in primaries to come. But there are reasons he currently belongs front and center among the top candidates—and they go beyond his vast fortune.