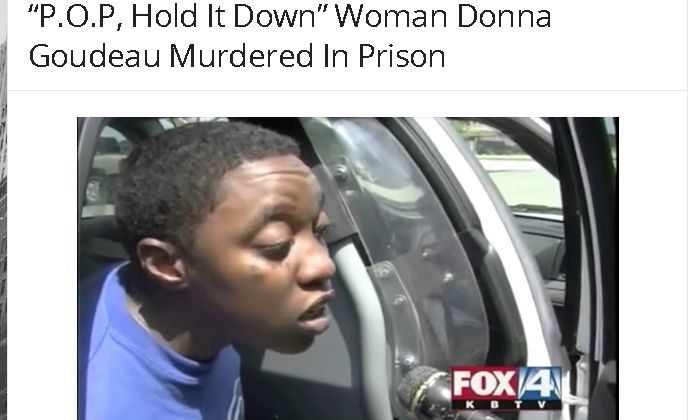 Donna Goudeau, a woman who was featured in a viral video, was not murdered in prison. (Huzlers.com screenshot)
Life & Tradition

Donna Goudeau Dies Hoax: ‘POP Hold it Down’ Woman Not Murdered in Prison; Not Dead

Donna Goudeau, a woman who was featured in a viral video saying “P.O.P hold it down,” isn’t dead, and she was not murdered in prison.

A fake report on a satirical website Huzlers.com is saying otherwise, however.

The disclaimer for the website says: “Huzlers.com is a combination of real shocking news and satire news to keep its visitors in a state of disbelief.”

The fake article had tens of thousands of shares on social media websites on Wednesday. Users on Twitter were apparently confused by the article.

“Damn man Donna Goudeau got murdered in prison!!!” wrote one person. Added another: “No more holding it down. Damn. RIP to Donna Goudeau.”

Said another, “The P.O.P. Hold it Down lady died in prison.”

Huzlers has had a number of its articles go viral over the past year or so, including fake articles with titles like WorldStarHipHop Shutting Down January 15th (of 2014), “59 People Die of Marijuana Overdose in Colorado and Washington,” and “Lil Boosie Lands in Jail Again for Marijuana Possession.”

It’s worth noting that Huzlers makes up fake stories about people that have gone viral on social media.

Here’s what part of the false Huzlers article about Goudeau says:

It is being reported that Donna Goudeau, the woman who is known for saying “POP Hold it down”, “barely”, and “I’m legally blind”, was stabbed to death earlier today in prison after apparently getting into a fight with another inmate, who happened to have a hidden blade.

Donna Goudeau became popular in 2014 after footage of her arrest in 2011 went viral on the internet. Donna Goudeau, Keyron DeWayne Elmore and Jeremy Jomard Goudeau were arrested for the beating, robbing and stabbing of a 73-year-old Kansas man by the name of Juan Sustiata. Donna was sentenced to 18 years in prison and was scheduled to be released in 2029.

Saturday night, myself and a group of friends celebrated our brother Vaughan’s moving away party. One of the key quotes that kept arising throughout the night was from the now infamous Instagram videos of the young woman being arrested. We felt bad for laughing, but continued to do so each time someone uttered, “Mama, I luh you!” or “P.O.P., hold it dinnne!” in her patented vociferous accent.

But none of us knew the real story. Until now.

The woman in question is Donna Renee Goudeau, a 28-year-old female from Jefferson County, Texas. Port Arthur is the second largest city in Jefferson behind Beaumont. The clip, which went viral on the Internet last week, was from news footage filmed in July 2011 when Donna Goudeau, Keyron DeWayne Elmore and Jeremy Jomard Goudeau were arrested for the beating, robbing and stabbing of a 73-year-old Kansas man by the name of Juan Sustiata.