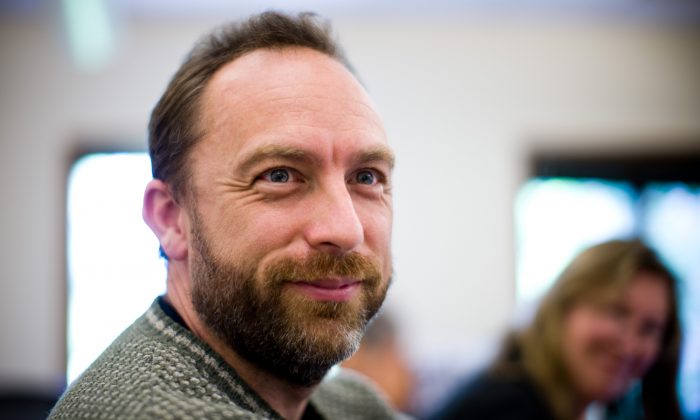 It’s almost become a tradition. Every year, the time comes when those glaring banners appear urging Web users to spare some change for their favorite source of trivia—Wikipedia.

Some 2.5 million people were inspired (or shamed) in December to ante up about $30 million to keep Wikipedia “online and ad free another year.”

And how reassuring it was then to receive that automated thank-you note signed by the foundation’s Executive Director Lila Tretikov.

“Each year, just enough people donate to keep the sum of all human knowledge available for everyone,” you would have read in her email if you’d shown some generosity.

Yet are your dollars actually saving Wikipedia from the clutches of online advertising?

Wikimedia Foundation, the nonprofit running Wikipedia and its sister sites, gained a reputation as an extraordinarily thrifty enterprise.

“Everything is managed by the volunteers and the total monthly cost for our bandwidth is about $5,000, and that’s essentially our main cost,” Wikipedia co-founder Jimmy Wales said in his July 2005 TED talk. At that time Wikipedia contained some 2 million articles and displayed well over a billion pages per month.

In 2004, the Wikimedia Foundation ran on yearly expenses of the unbelievably wee sum of $23,463, according to its financial statements.

Of course, today Wikipedia hosts over 34 million articles with over 20 billion monthly page views, so its expenses accelerated.

But one may be surprised just what has become of the operation that Wales fondly described as “rag-tag” and “chaotic” in 2005.

Today the Wikimedia Foundation employs about 200 people and aims to add dozens more this year.

It sports a legal and community advocacy department with a dozen staffers, 30 more work in fundraising, grant-making, and communications. These departments run yearly expenses of over $12 million.

Its communications people are just as polished as any company’s, producing sound bites like: “Wikimedia communities are what make our projects strong, unique, and irreplaceable, and we are taking steps to ensure we are continually improving our ability to support them.”

The foundation finished last year with almost $28 million in cash and about $23 million in investments.

It’s 2015 annual plan even notes it’s unnecessary to budget for expanding its cash reserves because a “track record of overachieving its revenue targets and underspending against plan means that the reserve continues to grow more quickly than spending.”

Yes, year after year you’ve been donating to Wikipedia way more than it’s managed to spend.

“Our reserves vary throughout the year but are generally around 1 year of revenue. The typical recommendation for stable and successful nonprofits is to have between 6 months and 2 years of reserves,” he stated in a Quora post. “It is arguable that we could cut back some … but it is equally arguable that we should increase our reserves to 2 years.”

Indeed, the foundation plans to cash in over $58 million in revenue this year. But what Wales failed to note is that reserves should cover costs, not revenue.

So what’s the golden ratio for a sound reserve?

“Most standards are based on a formula that provides the organization enough cash to cover operating expenses for three to six months,” explains Kate Barr, nonprofit management expert and executive director of the Nonprofits Assistance Fund. “At the high end, reserves shouldn’t exceed the amount of two years’ budget.”

In other words, Wikimedia runs a reserve on the generous edge.

Yet Wales may have a point: The foundation plans to spend some $50 million this year.

What does it spend the money on?

The technical backbone of Wikipedia hasn’t been relying on volunteers for quite some time. By 2010 the foundation employed about 50 people with $10 million budget.

As the websites continued to grow, so did the operational costs. But with donations going through the roof, the nonprofit started to invest in many more activities than just running the site.

By 2015 it distributes $6 million in grants to its local chapters. The German Wikimedia receives the most, over $900,000.

The chapters usually work on their own projects to improve and expand the site. Yet many of the chapters, despite rising costs, lacked the “ability to execute and demonstrate proven results,” according to a report last year by the foundation’s Funds Dissemination Committee.

The foundation paid almost $2 million last year for travel and attending events. That’s more than $10,000 per employee. The foundation didn’t respond to an inquiry about what were the money typically spent on.

But the largest chunk of the budget, about $20 million, is spent on Wikimedia Foundation’s army of more than 120 engineers and development staff.

Part of their work is to keep the websites running, but they’d been able to do that five years ago too, with a fraction of its current personnel.

Extra manpower was invested in projects to expand or improve Wikipedia.

Yet in recent years the team repeatedly clashed with the volunteer community over the direction of the development. Multiple projects were introduced only to be scathingly criticized and rejected by the community.

In 2013, for example, the foundation introduced a more user-friendly way to edit and create Wikipedia articles called VisualEditor. The feature was rejected immediately for numerous bugs, including mangling of formatting in existing articles. The foundation’s representative confirmed the engineering team still works on VisualEditor but couldn’t say when it will be ready.

“The Foundation has a miserable cost/ benefit ratio and for years now has spent millions on software development without producing anything that actually works,” wrote Henning Schlottmann, German Wikipedia administrator, last spring.

Wikipedians now ponder the future of the foundation.

There’s something though many agree upon already: the way it solicits money should change.

“I thought that we had collectively agreed that banners that directly threaten advertising [may be introduced on Wikipedia] next year were not going to happen any more,” commented Wikipedia Weekly Podcast interviewer Liam Wyatt in a Nov. 27 post on gossamer-threads.com.

So, when you see the banners next time urging you to spare $3 for Wikipedia, know that most of your contribution won’t necessarily help run Wikipedia itself. Rather you’d support the foundation that promotes the ideas Wikipedia is based on. That, among other things, means Wikipedia would stay ad free.