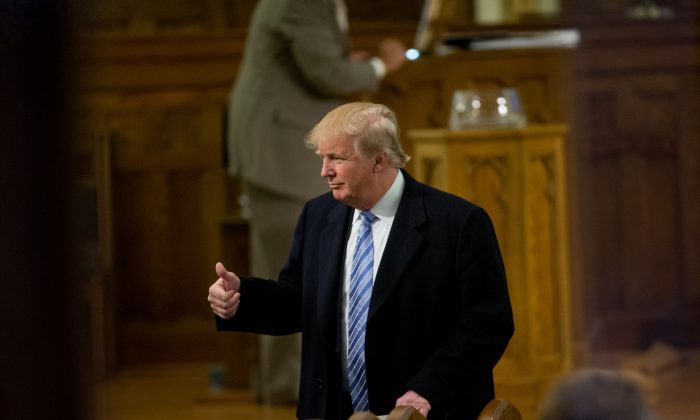 Republican presidential candidate Donald Trump give a thumbs up as he arrives for service at First Presbyterian Church in Muscatine, Iowa, Sunday, Jan. 24, 2016. Trump will be holding a rally at Muscatine High School in the afternoon. (AP Photo/Andrew Harnik)
Politics

MUSCATINE, Iowa—On the second-to-last Sunday before the Iowa caucuses, Donald Trump settled into a fifth row pew for a lesson in humility.

“I don’t know if that was aimed at me. Perhaps,” Trump said after the hour-long service at the First Presbyterian Church in Muscatine.

Religious voters are a big factor in the opening contest on the presidential nominating calendar, and Trump is working to build his appeal among them, especially considering his chief challenger in the Republican race is Texas Sen. Ted Cruz, a conservative preacher’s son who’s made deep inroads with evangelicals.

Several reporters were invited to observe Trump’s visit to the church for a service that included hymns, readings and a performance by the children’s choir. The cream-colored stained glass window tiles cast a golden glow.

At one point, Trump shared a prayer book with a woman seated to his right. She put her hand gently around Trump’s waist as the congregation sang Hymn 409, “God is Here!”

During the passing of the peace, when church-goers give each other wishes, Trump received warm greetings from those around him.

When it was time to offer tithes, Trump was seen digging into his wallet. Two folded $50 bills were later spotted in a collection plate that was passed down his pew.

One reading during the service, about the importance of humility, included a reference that caught Trump’s ear.

“Can you imagine eye telling hand, ‘Get lost, I don’t need you’ or hearing the head telling the foot, ‘You’re fired, your job has been phased out?'” the reader said in a reference to Trump’s signature phrase when he was the star of “The Apprentice.”

In her sermon, the pastor, Pamela Saturnia, also made several references with resonance.

“Jesus is teaching us today that he has come for those who are outside of the church,” she said, preaching a message of healing and acceptance for “those who are the most unloved, the most discriminated against, the most forgotten in our community and in our world.”

Among those she cited were “the Syrian refugees” and “the Mexican migrants.” Trump has advocated barring all Syrian refugees from entering the country and deporting all of the estimated 11 million people living in the United States.

As a candidate, the thrice-married New Yorker has worked to foster relationships with Christian leaders. He received a glowing introduction last week from Jerry Falwell Jr., president of one of the country’s most prominent evangelical Christian universities, and on Saturday was joined on the campaign trail by the Rev. Robert Jeffress of First Baptist Dallas, a megachurch.

At times, Trump has appeared to struggle to affirm his Christian credentials. He often feels compelled to remind Christian audiences that he was raised as a Presbyterian. He has brought to and waved a copy of his childhood Bible and a photo of his confirmation at some events as evidence of his upbringing.

He has made what have been seen as several minor missteps on religion during the campaign, mistakenly pronouncing Second Corinthians as “two Corinthians” during a speech last week at Liberty University in Virginia, Falwell’s school, and saying in an interview that he had never sought forgiveness from God.