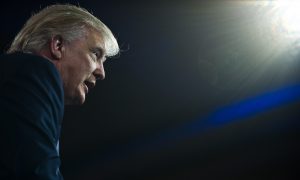 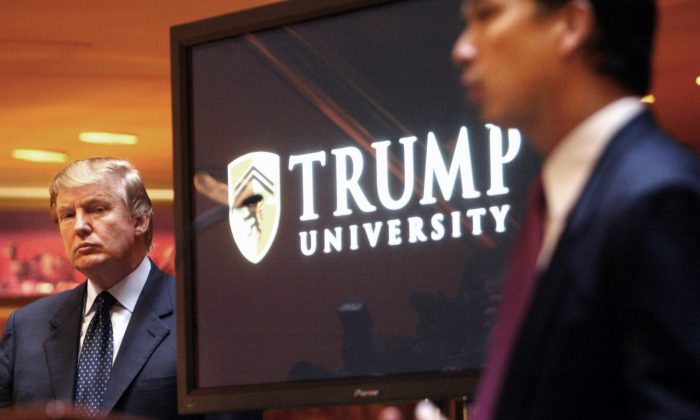 FILE- In this May 23, 2005, file photo, real estate mogul and Reality TV star Donald Trump, left, listens as Michael Sexton introduces him at a news conference in New York where he announced the establishment of Trump University. Tarla Makaeff a yoga instructor, has had enough of Trump after six years fighting him in court. Makaeff, wants to withdraw from a federal class-action lawsuit that claims Trump University fleeced students with an empty promise to teach them real estate. (AP Photo/Bebeto Matthews, File)
US

Donald Trump to Testify in California Lawsuit Against Trump University

Trump is set to take the stand in a class-action lawsuit against his Trump University.

Donald J. Trump, the presumptive Republican presidential nominee, will take to the witness stand, according to his lawyer, Daniel Petrocelli.

This particular San Diego, California, case is one of three that has been leveled against Trump University for defrauding students. One, filed by New York Attorney General Eric T. Schneiderman in 2013, is for $40 million.

“More than 5,000 people across the country who paid Donald Trump $40 million to teach them his hard sell tactics got a hard lesson in bait-and-switch,” said Schneiderman in 2013.

Individuals paid up to $35,000 for real estate seminars from “handpicked” experts at the now non-existent Trump University. Plaintiffs note that they were promised that they would learn the secrets of success in the real estate business and would become rich in the process.

Trump has brought up the San Diego suit several times during his primary campaign—notably, in early in 2016:

“There’s a hostility toward me by the judge—tremendous hostility—beyond belief.” Trump noted on Feb. 27. “I believe he happens to be Spanish, which is fine. He’s Hispanic—which is fine.”