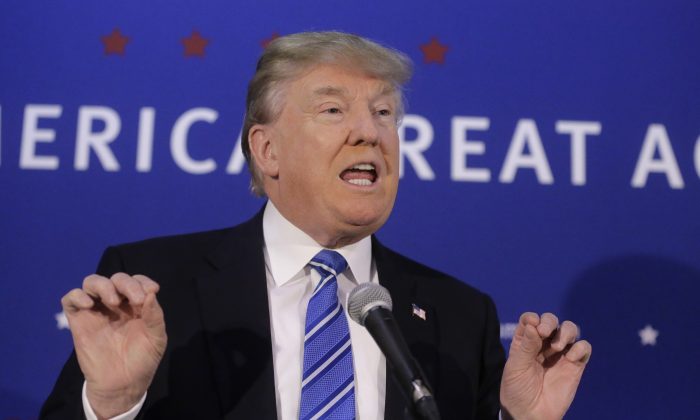 Leading Republican presidential candidate Donald Trump says the United States might have to do things that would have previously been “unthinkable” following the terrorist attacks in Paris.

The attacks, which extremist Muslim group ISIS later took credit for, left 129 people dead and hundreds of others wounded.

Yahoo prompted Trump by asking, after he noted he has concerns about the Muslim community in America, whether his push for increased surveillance of American Muslims could include warrantless searches.

“We’re going to have to do things that we never did before. And some people are going to be upset about it, but I think that now everybody is feeling that security is going to rule,” Trump said.

“And certain things will be done that we never thought would happen in this country in terms of information and learning about the enemy. And so we’re going to have to do certain things that were frankly unthinkable a year ago.”

Yahoo then asked Trump whether he would consider registering Muslims in a database of making them carry a special form of identification that noted their religion, and he wouldn’t rule it out.

He admitted that the idea is “frankly unthinkable” but emphasized it might need to be done.

Trump’s comments came a few days after he was asked if he would follow new British proposals for battling extremism, including revoking passports of people who want to travel to fight with ISIS and closing mosques that support extremists.

“I would do that, absolutely, I think it’s great,” Trump said on Fox News.

When pressed about the potential legality of shutting down mosques, Trump added: “Well, I don’t know,” he said. “I mean, I haven’t heard about the closing of the mosque. It depends, if the mosque is, you know, loaded for bear, I don’t know. You’re going to have to certainly look at it.”

Trump in the new interview later slammed the students on college campuses calling for “safe spaces” to protect them from allegedly offensive commentary, noting his support for free speech.

“I think it’s one of the reasons I’m leading by so much in the polls, because we don’t have time to be so politically correct in this country and we have much bigger problems, as you can see.”