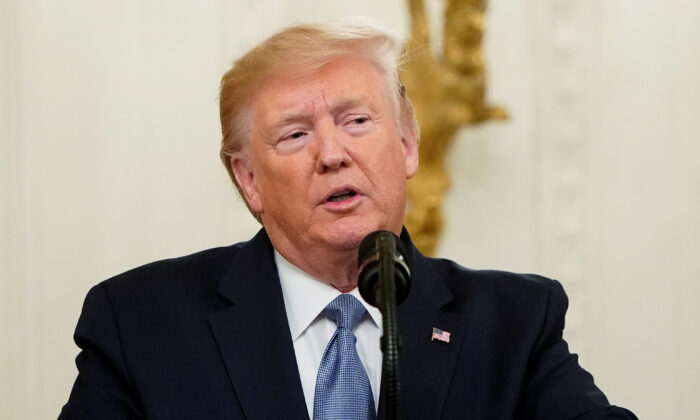 President Donald Trump speaks prior to awarding the Medal of Honor to U.S. Army Master Sgt. Matthew Williams in the East Room of the White House in Washington on Oct. 30, 2019. (Joshua Roberts/Reuters)
Trump Administration

Hailing the Trump-led development, he said: “This is a transformational moment in our history.

A series of incidents rocked the Veterans Affairs agency in recent years. Among other scandals, CNN reported in 2014 that at least 19 veterans died in VA hospitals in 2010 and 2011 due to delays in diagnosis and treatment. It also reported that in the same year, 40 veterans died while waiting for appointments to see a doctor at the Phoenix Veterans Affairs Health Care System.

The reports of veterans not getting adequate health care triggered an Obama administration investigation in Phoenix.

Wilkie noted that VA employees were removed for not performing their duties to the proper standards.

Speaking about about Veterans Affairs during an October speech in Florida, President Donald Trump said: “Do you remember all of the bad stories that used to be about the VA? Now you don’t see that because they have accountability. We can fire bad people. We fired a tremendous number of really bad people that should’ve been fired years ago. I don’t like firing people, but I like firing people that don’t treat our vets great, that aren’t doing their job.”

In 2018, the president dismissed former VA Secretary David Shulkin after an inspector general report stated that he had engaged in wasteful and unethical actions. According to the Military Times, Shulkin was the only holdover from former President Barack Obama’s administration who also served in Trump’s Cabinet, having previously served as VA undersecretary for health from 2015 to 2017.

In the Nov. 8 speech, Wilkie also praised Trump for giving his agency the largest budget in its history. “This puts veterans at the center of their health care decisions, not the institutional prerogatives of VA, but veterans,” he said.