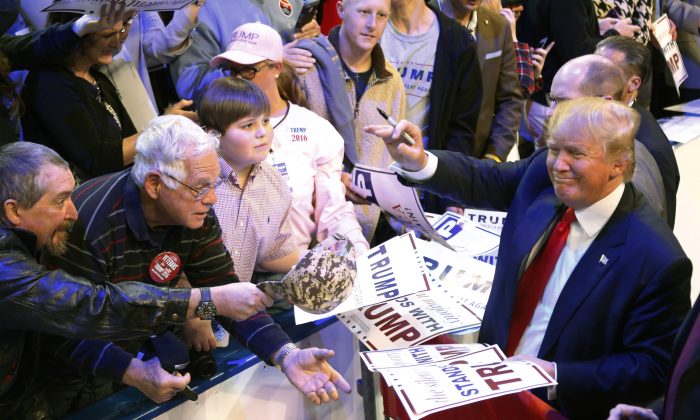 The 30-second spot focuses on some of Trump’s most controversial proposals, including his plan to ban Muslim immigrants from the United States.

“The politicians can pretend it’s something else but Donald Trump calls it radical Islamic terrorism,” says a narrator while images of the San Bernardino shooters and masked jihadis are shown. “That’s why he is calling for a temporary shut down on Muslims entering the United States until we can figure out what’s going on.”

Trump vows in the ad to “quickly cut the head off ISIS and take their oil.”

He also emphasizes his intention to expand the border wall on the Texas border, with the voice saying “He’ll stop illegal immigration by building a wall on our southern border that Mexico will pay for.”

The ad is a significant development for Trump because he’s mostly done his own promotion, giving interviews and calling in to talk shows.

“I am leading in every poll by wide, double digit margins. We have tremendous crowds, incredible support from all over the country and I am $35 million dollars under budget,” said Trump in a statement released by his campaign.

“We have spent the least amount of money and have the best results, and this is the kind of thinking the country needs. I am very proud of this ad, I don’t know if I need it, but I don’t want to take any chances because if I win we are going to Make America Great Again.”

Trump told reporters last month that he’ll spend a minimum of $2 million per week on the television ads, which will air in Iowa, New Hampshire, and South Carolina.

“If somebody attacks me, I will attack them very much and very hard in terms of ads,” he added.

The other caucuses around the country will continue through June 7.