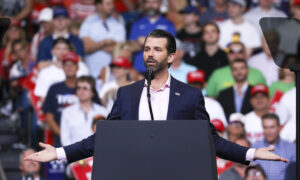 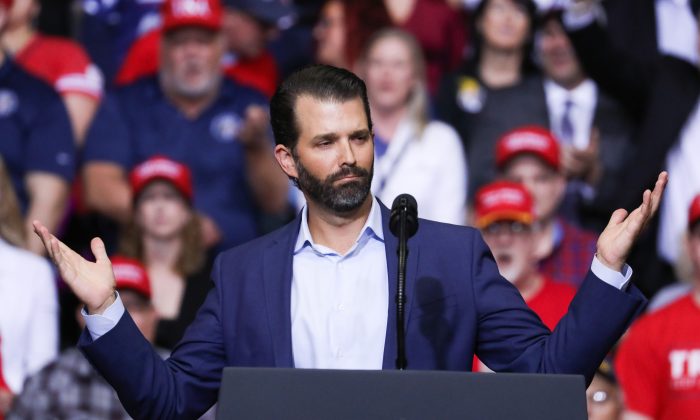 The spokesman said that Trump Jr. has been “quarantining out at his cabin” since the positive COVID-19 test at the start of the week.

“He’s been completely asymptomatic so far and is following all medically recommended COVID-19 guidelines,” he said.

Trump Jr., 42, is the latest in the president’s circle to contract the CCP (Chinese Communist Party) virus, commonly referred to as the novel coronavirus, following President Trump’s diagnosis on Oct. 2. By Oct. 12, the president, who experienced mild symptoms, had recovered, testing negative for two consecutive days, and appeared at a rally in Florida.

Kimberly Guilfoyle, Trump Jr.’s girlfriend, had tested positive for the CCP virus earlier this year as the two were on the campaign trail for Trump across the country.

COVID-19 is a disease that primarily requires hospital care in the elderly and people with compromised immune systems. A significant portion of all CCP virus patients show few or no symptoms, according to U.S. health officials. The vast majority of patients survive.

“This morning, I tested positive for COVID-19. I am experiencing mild symptoms, and am following all appropriate protocols, including being in quarantine and conducting contact tracing,” he announced on Twitter.

Legal adviser to the Trump campaign Jenna Ellis announced Friday on Twitter that she and Giuliani both tested negative for the CCP virus.

“Mayor [Rudy Giuliani] and I have both tested negative for COVID-19,” she wrote. “The entire legal team will continue to follow the advice and protocols of our doctors.”

Multiple states across the country are imposing new restrictions to prevent the spread of the CCP virus. In California, Governor Gavin Newsom on Thursday announced a near statewide month-long curfew, requiring non-essential work and gatherings to halt between 10 p.m.-5 a.m.