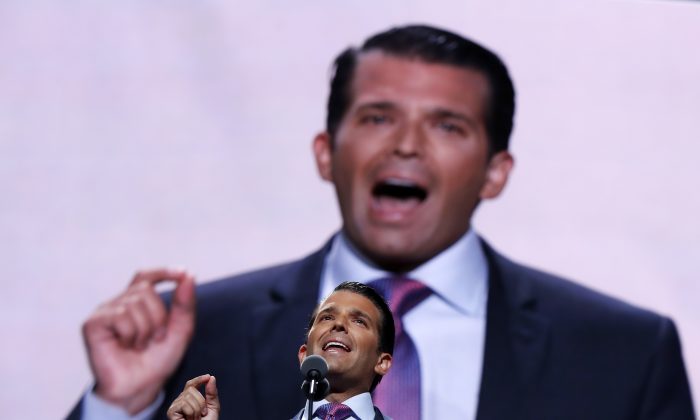 Some media outlets said that the younger Trump had plagiarized one part about education in the United States.

During the RNC on Tuesday night, the son of Republican presidential candidate, Donald Trump, said: “Our schools used to be an elevator to the middle class. Now they’re stalled on the ground floor. They’re like Soviet-era department stores that are run for the benefit of the clerks and not the customers.”

The paragraph was similar to a line written by F.H. Buckley in The American Conservative, in which he said:

“What should be an elevator to the upper class is stalled on the ground floor. Part of the fault for this may be laid at the feet of the system’s entrenched interests: the teachers’ unions and the higher-education professoriate.

Our schools and universities are like the old Soviet department stores whose mission was to serve the interests of the sales clerks and not the customers.”

A few reporters, including Keith Olbermann, highlighted the line. The Daily Show also tweeted about it.

Buckley, however, shot back, saying “it wasn’t stealing.”

He told Business Insider later that “I was a speechwriter for this speech. So I’m afraid there’s no issue here.”

F.H. Buckley tells @businessinsider: “I was a speechwriter for this speech. So I’m afraid there’s no issue here.”

Buckley elaborated more on Wednesday, tweeting that it’s “such a silly kerfufle about the speech. Ironically, the lines I used I didn’t invent. I borrowed them from someone else. I forget whom.”

“Nice try Clinton machine—Francis Buckley is a friend of Don Jr.’s and worked with him on the speech,” Miller tweeted. “Your time would be better spent searching for Crooked Hillary’s missing emails rather than disparaging a real American Patriot.”