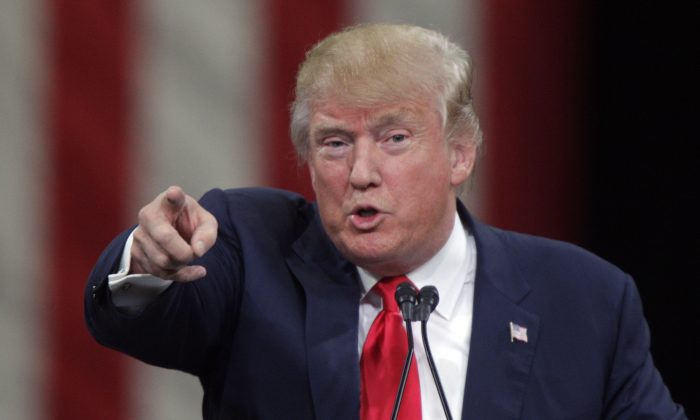 Trump is one of the leading Republican candidates, along with Ben Carson.

Trump said it’s too early to definitively name a potential running mate, which would likely come from among his GOP opponents, but did note his affection for Cruz.

“Ted Cruz is now agreeing with me 100 percent,” Trump said November 17 on The Laura Ingraham Show.

The Hill noted that unlike most of the Republican presidential hopefuls, Cruz has mostly refrained from attacking Trump. The pair even appeared together in September at a rally against the Iran nuclear deal.

Cruz has publicly praised Trump for his stance on immigration.

“I salute Donald Trump for focusing on the need to address illegal immigration,” Cruz told host Chuck Todd on Meet The Press back in July. “I like Donald Trump. He is bold, he is brash.”

“He has a colorful way of speaking, and it’s not my way of speaking, but I salute him,” he added, noting that he agrees with Trump on the immigration issue as opposed to “The Washington cartel,” or the establishment.

“First, we secure the borders and then we can discuss what to do with all the people who are already here,” he said of America’s undocumented immigrant population.

The Gang of Eight in 2013 pushed for amnesty for illegal immigrants, something Trump opposes.

Trump thinks Bush’s campaign is basically finished even though “You can’t watch television without seeing a (Bush) ad, all paid for by special interests and lobbyists.”

Cruz Could Be Rival

Still, if Cruz is able to gain enough on Trump then Trump didn’t discount taking him on as a rival.

“If he catches on, I guess we’ll have to go to war,” he told host Joe Kernen on Squawk Box.

“We’ll see what happens but so far we haven’t. He’s been very supportive [and] we have a lot of the same ideas. “Well, he’s been very nice and supportive of everything I’ve said, more than anybody else.”

According to the latest sampling of polls from RealClearPolitics from October 29 through November 4, Trump is an average of 1 point ahead of Ben Carson with 24.3 percent of Republican support. Rubio is third with 12.3 percent and Cruz is fourth with 10.7 percent.

A new Morning Consult poll of 774 Republican and Republican-leaning independents released Nov. 17 shows Trump way ahead with 38 percent support, versus Carson with 19 percent and Cruz and Rubio with 7 percent each.

Also this week, a University of Massachusetts and YouGov poll (pdf) of 318 likely Republican primary voters showed 31 percent voting for Trump, 22 percent for Carson, 13 percent for Cruz, and 9 percent for Rubio.

The rest of the field is lagging behind, including Bush, who was considered a frontrunner when he first announced his candidacy.