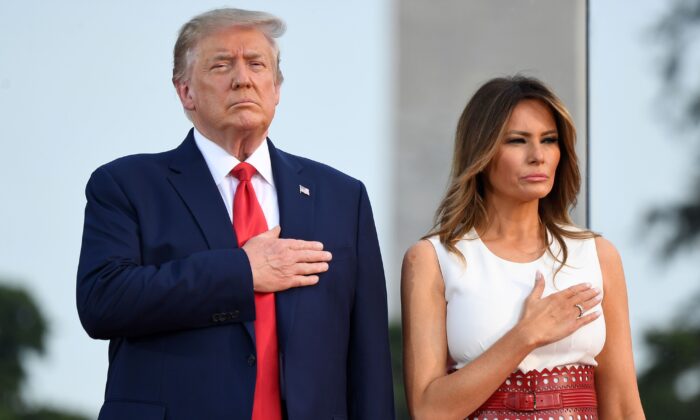 President Donald Trump and First Lady Melania Trump host the 2020 "Salute to America" event in honor of Independence Day on the South Lawn of the White House in Washington on July 4, 2020. (Saul Loeb/AFP via Getty Images)
Opinion

Why, of all countries, is the the United States a world center of neo-Marxist thought?

There is now an endless succession of neo-Marxist dogmas emanating from, of all places, the USA. The cumulative effect of these is to undermine religion, the family, private property, the rule of law, honest and fair elections, and above all, American exceptionalism, including her Constitution. Not one dogma should be seen in isolation, the aggregate aim being to bring down the United States and the West. The likely and planned result will be that Beijing will move into the vacuum.

Until the attack on Pearl Harbour in 1941, the United States was reluctant to accept the role of the political and diplomatic leadership which inevitably flowed from her then economic, military, and growing cultural dominance.

But the very concept of the United States was then unquestioningly based on Judeo-Christian values and a central and fundamental belief that all men are created equal, that they are endowed by their Creator with certain unalienable Rights, and that to secure these rights, governments are instituted among men, deriving their just powers from the consent of the governed. In brief, this is American exceptionalism. Being human, American authorities had applied these principles imperfectly but they were prepared to pay the price of a terrible and bloody Civil War to block a secession to preserve slavery.

For long, what is intellectually à la mode in New York, Hollywood, and San Francisco is soon adopted across the West, especially in the Anglosphere. But what flows from American elites is no longer necessarily consistent with American exceptionalism but increasingly with neo-Marxist dogmas.

The reasons for the United States evolving into a significant center for neo-Marxist thought are at least three.

First, the decline in religion, accelerated by an increasingly anti-religious political and judicial establishment.

This has led to a parallel decline in the acceptance of the nation’s Judeo-Christian values as well as of the concept of American exceptionalism. This is to be found in those extraordinary documents, the U.S. Constitution and the Declaration of Independence, which, Churchill declared is, after the Magna Carta and the Bill of Rights, the “third great title-deed on which the liberties of the English-speaking people are founded.”

The consequence of this decline in religion was not that man became correspondingly more wise and more rational. As GK Chesterton is believed to have asserted (and which is consistent with his teachings), “When man stops believing in God, it is not that he believes in nothing. It is that he will believe in anything.”

Man seems programmed to believe, indeed believing is part of our nature. But if God is taken away, He is too often replaced by pseudo-gods and primitive and often foolish beliefs. For the far left, the traditional approach used to be to seek a general commitment to socialism, for example, along the lines found in Marx’s now little read Communist Manifesto. To this has been added apparently separate and thus digestible dogmata such as “gender theory” or “critical race theory.” These are normally first perceived to be ridiculous but the strength of the neo-Marxist establishment eventually ensures that they become operable. It is then that it is realized that underneath it all, there is a serious and sinister purpose. Thus it is feared that one of the early decrees unilaterally proclaimed by President Joe Biden, one applying gender theory, will destroy women’s competitive sports as well as the security of women’s safe places.

The second factor relates to those who, out of greed, willingly join with the “true believers” in a vast neo-Marxist united front. These are the successors to the “useful idiots” who, in words attributed to Lenin, have always been ready even to sell the rope with which the communists would hang them.

What Beijing offers is vastly more attractive than anything Lenin ever could. The communists regularly unveil a veritable cornucopia, wealth which dazzles the American and other Western establishments—industrial, political, academic, cultural, media, and sporting. This remains beguiling even when it is realized that the inevitable price to be paid is U.S. and Western decline, and that those who fall into the trap become captive. The condition of the offer from the CCP is obvious, “We can make you rich, but beware. We can just as easily take that away.”

The third factor is the long march of the neo-Marxists through the institutions, above all the schools and colleges. This has too often occurred without the conservative authorities even noticing. This ensures the existence of a growing, receptive audience who after one generation are likely to know little else. This is enforced by what has become known as O’Sullivan’s Law, named after British journalist John O’Sullivan, an intimate of Margaret Thatcher. This states that any organization or enterprise that is not expressly right wing will become left wing over time. When Beijing’s wealth is added, the decline of religion and the softening of the educational exposure over the first generation, the tendency and the attraction is overwhelming to the neo-Marxist left.

I was recently confronted with that neo-Marxist dogma, critical race theory, in response to my conclusions about the Trump presidency. In summary, my view is that President Trump succeeded just in one term in reversing the decline of the United States, not only economically but also ideologically and morally. An emotional attack on my conclusion ended with what seems to be a variation of the now standard default response: “You racist jerk.” This was curiously inappropriate, given my Eurasian origins.

Critical race theory is but one of the many myths which have poured out of American universities. Its strongest proponent is the party that previously strongly supported slavery and then segregation, the Democratic Party, led now by a President who himself emerged as a prominent segregationist senator and who famously declared in the recent election campaign that any African American daring not to vote for him is not black.

All of these and similar myths are part of the neo-Marxist armory designed to bring down Western civilisation. The aim of the conspiracy of the cabal of “important people,” a working party of the united front of believing and billionaire neo-Marxists recently revealed by TIME, was not only to remove Trump. It is also to ensure no other outsider ever dares disempower their swamp. What unites the cabal is the veritable cornucopia and the Marxist paradise Beijing offers, even if the price is the United States and Western decline.

Pseudo-scientific, these myths are slipped into the curriculum by our captured teaching institutions, no matter which party is in power. Orwellian Newspeak is typically used to limit discourse to approved thought. Thus, using “gender” instead of “sex” concedes that being a man or woman is not determined at birth. It is a matter of choice. That this has grave consequences is illustrated by the fact that the incumbent president has, by a stroke of his pen, destroyed women’s sport as well as the security of women’s lavatories, etc.

Resistance to the myths is sanctioned, if not by law, by the social media—key members of TIME’s cabal of conspirators.

The central myth today is the discredited theory of catastrophic anthropogenic global warming. Because such warming inconveniently stalled, Newspeak now uses the substitute term “climate change.” (We should not, just as we should not use “gender” when we mean sex).

According to a U.N. functionary in a moment of candor, the true purpose of the global warming dogma is to impose a global socialist model. Although Beijing has promised net-zero emissions, just as they promise not to commit genocide, they are laughing all the way to American decline, building last year more than three times as much new coal power capacity as all other countries combined.

Beijing has one of two approaches to American-sourced neo-Marxist dogmas. Either give notional support to them, or ignore any which are of no advantage, presumably including gender theory, knowing that the advantage is that this will help weaken the West.

It is a mistake to think that all these dogmas are new.

Recently, while the band played Amazing Grace, the mass-going, rosary-carrying President Biden honored the 500,000 Americans said to have died from (or in many cases with) the Wuhan virus. But when he restored $9 billion in foreign aid to abort or kill foreign babies previously disallowed by President Trump, no band played either for the babies to die or for 30 million mainly healthy American babies, disproportionately black, killed under the Supreme Court’s invention in Roe v Wade (1973) of a constitutional right based on the myth of women’s choice.

One of the oldest dogmas in the armory, now applied up to and even beyond birth, demonstrates an intrinsic feature of Marxism: a propensity to take away human life whenever it is convenient, possibly to a total of well over 100 million in Marxist dominated countries.

In recent years, by far the strongest and most effective opposition to the spreading of neo-Marxist dogma was by President Donald Trump. In just one term, he had the neo-Marxist united front on the run. He was and remains a bastion against this evil.

He sets the example to Americans and their friends that the only answer is to resist lawfully, patriotically, and peacefully.

That is why TIME’s cabal of conspirators used any every means to remove him. But their attempt to ensure he could not return and that no follower would attempt to copy him have both failed.

Donald Trump is right. With a successful re-assertion of American exceptionalism, and only with that, the best is yet to come.